What Are All These Painted Paddington Bears Doing in London? 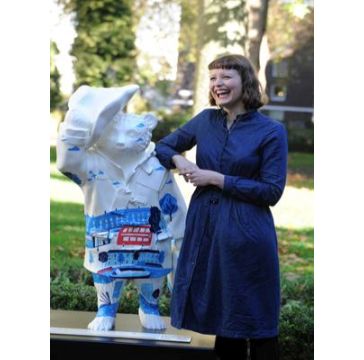 More than fifty Paddington Bears are taking over London this autumn, and they all look different: they are original designs by an impressive string of celebrities – from Benedict Cumberbatch to Emma Watson, Rankin and David Beckham. But only one bear has been designed by an illustrator, and that’s Paddingtonscape, by jelly London’s Hannah Warren.

#PaddingtonTrail is an initiative by Visit London, the NSPCC and STUDIOCANAL ahead of the release of the long awaited Paddington film on 28 November. Paddington filmstars Nicole Kidman, Ben Wishaw and Hugh Bonneville all created their own Paddington Bar statues, while Hannah Warren was asked design her bear inspired by the area surrounding Paddington Station.

Paddingtonscape features the canals and narrow boats of Little Venice, located at the back of Paddington Station, as well as swans, and many other features of daily London life and the quintessential West London scenery. 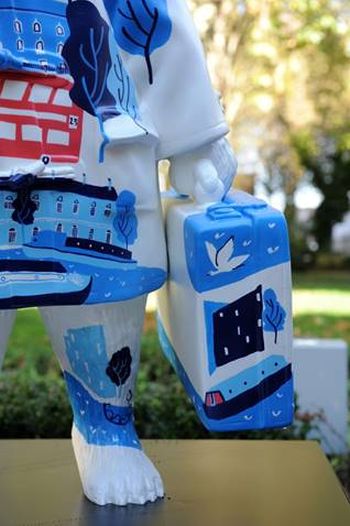 Hannah Warren stands out for her exceptional use of simple shapes and vibrant colours in her visual storytelling. Her vivid London-themed illustrations adorn the book Tired of London, Tired of Life by Tom Jones as well as many editorial publications such as The Drum, Stella Magazine and Pentagram. She is represented globally by jelly London.

Visitors will be able to follow in the furry footsteps of the world’s favourite Peruvian explorer visiting locations across the capital from as far west as Heathrow through to the O2 in the east, taking in some of London’s key cultural attractions such as The Royal Opera House, Museum of London, Horse Guards Parade, the Museum of Childhood and, of course, Paddington Station with the trail ending in Selfridges, from 4 November – 30 December 2014.

VisitLondon.com has also launched a dedicated section of their website which will enable visitors to London to find out more about the trail and, later in the month, download the trail map, share their pictures and discover the stories behind each statue and location.