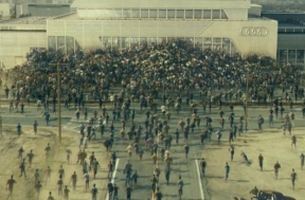 “Vorsprung durch Technik” – At Audi, this promise doesn’t end with the development and production of a new car. The brand’s aspiration also holds good for customers’ everyday lives: when it comes to service.

Under the banner “Making sure your Audi doesn’t fall into the wrong hands,” Audi Germany and the Berlin branch of the thjnk agency group are launching a campaign for Audi Service that’s more all-embracing than ever before. Its focus is not the “conventional” communications about service personnel and what they have to offer, but rather the monumental showcasing of the eternal struggle between good and evil.

Silke Miksche, Head of Marketing Communications Germany: “The subject of “service” is of tremendous importance both for the customer and for us as car manufacturer and our dealerships – and yet it has so far not been the focus of our communications. The way we approach the subject is altogether unexpected – emotional, spectacular, epic. In other words, this is truly big-screen stuff.”

Stefan Schulte, Managing Director Creation, thjnk berlin: “It’s fantastic to tell stories – preferably on a grand scale. No matter which medium it’s in, good storytelling is and will remain the most important component of successful communications.”