Welcome to ‘Appsterdam’: Why the Dutch Capital is A Digital Powerhouse

Trends and Insight 598 Add to collection 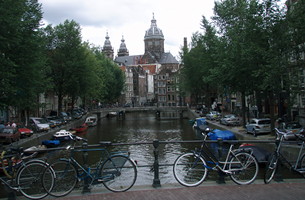 If San Francisco has a Silicon Valley and London has a Silicon Roundabout, Amsterdam has a network of Silicon Canals that carries the spirit of digital innovation to every corner of the city. Dutch tech giant Philips was founded in 1891 and that inventive heritage has fed a city with a vibrant start-up culture and a solid track record for creative innovation (Amsterdam recently came 4th in Deloitte’s Technology Fast 500 Ranking.

In the advertising world, that essence seeps into digital production companies, post houses and of course agencies which can be relied upon to push boundaries.

For Diederik Veelo, Founder of The Ambassadors Lab & Cube, Amsterdam’s status as a digital heavyweight is no surprise. “It’s no coincidence that this city is home to such category-disrupting forces as Booking.com, The Next Web and has gained the nickname ‘Appsterdam’. Fellow Amsterdammer and senior strategy director at Blast Radius, Simon-Neate Stidson, put it beautifully when he said: ‘Perhaps it is the city's compactness that forces people to 'think outside the box' and strive for the big idea.’”

72andSunny Amsterdam creative technologist Gabor Szalatnyai agrees that there is something magical about the city’s size and infrastructure. If Dante defined hell as ‘proximity without intimacy’, then perhaps Amsterdam, with its proximity, intimacy and countless opportunities for collaboration, is digital heaven.

“If we look for comparison, London offers up itself as a city with similarly outstanding tech and creative output. However, looking at the two more closely, two significantly different characteristics come to light. London, a much bigger metropolis can’t compete with the cosiness and the quality of life in Amsterdam,” says Gabor. “It’s not only just that the commutes are shorter and the cost of living is lower here, but also that there are more companies to partner with within a 20-minute bike ride. The same stands for the meetups to network at, cafes to work in, galleries to be inspired by and talent to work with. Maybe only the Silicon Roundabout shows similar density in London but as a result of its rapid success, now it’s oversaturated and many fresh companies are looking for other, more affordable areas to settle. Amsterdam presents all these advantages while keeping its ‘international village’ charm and metropolitan cultural richness.”

Gabor cites R&D centres like the Mediamatic or the Waag Society, which are leading the conversation about how technology can be deployed creatively. They’re also actively engaging the local art scene and academic circles in order to connect them with digital innovators. It’s a city that just can’t help putting interesting people together.

A relative newcomer to the city, Wieden+Kennedy Amsterdam’s Head of Integrated Production Kelsie Van Deman, like thousands of others, has been attracted to the city thanks to its reputation as a European hub. This magnetic quality that pulls in talent from all over the globe means that the Dutch industry is vibrant, multicultural and uniquely served by a diverse array of perspectives. "The culture of Amsterdam just incites that innovative spirit. Openness, creativity, access to technology, unique global perspectives, boldness and freedom to experiment are all things that position us to innovate and continue to foster innovation within the local Amsterdam community and the world," she says.

The indigenous culture too gives Amsterdam’s digital sector a singular drive. As any local will quite happily tell you, there’s a directness embedded in the culture and social norms prioritise frankness over fanciness. For Diederik Veelo this no-nonsense ethos is at the heart of Amsterdam’s digital success; people don’t just talk big ideas, they get things done.

“The spirit of Amsterdam is less about making fancy statements and more about action. It’s inherent in the Dutch culture and has been amplified by the entrepreneurship and innovation that has become the lifeblood of this city. Which fits perfectly into today’s technology-driven world, because when technology moves at today’s speed, there is no time for perfection seeking. There is no time to iterate and improve on what we’ve learned because what is possible today will be outdated tomorrow.

“For me it simply boils down to ‘Doing it’ – we’ve got to develop projects differently. We can’t just build, test and launch anymore. We need to hack things together, get it out there as soon as possible.”

This openness of spirit, argues Gabor, also means that Amsterdam’s innovators are not fumbling around, developing blindly. There is plenty of honest feedback. “The Amsterdam tech scene’s character is strongly influenced by how its community relates to innovation and how it receives technology. This relationship is constantly redefined by an open and positive critical conversation about the global, local, social and cultural aspects of technology. This helps to avoid the chasing of empty hype without slowing the pace of innovation. In the discourse, technical progress is typically approached practically and from the community’s point of view and this gives a unique flavour to the inventions coming from Amsterdam.”

Despite – or perhaps because of – the collaborative cosiness, Amsterdam has to be extra-vigilant when it comes to staying ahead of the curve. Kelsie Van Deman worked in San Francisco for a decade before heading to the Netherlands and warns against complacency.

"I think the best way to continue to evolve the culture of tech and creative innovation in Amsterdam is to not get too comfortable and continue to challenge ourselves. Having spent the past ten years in San Francisco, I loved how contagious the energy felt with so much innovation happening in the city. (That also could have been subliminal because I worked in the South of Market area where every other person is wearing jeans and their startup’s hoodie). You could see first-hand the impact that innovation could have in people’s lives and that made it even more addictive and exciting. I think the more that Amsterdam continues to solve problems through innovation, then the more contagious innovation will become here and the better positioned we will be in the future."

However, in her time at the agency she’s been warmed by the aptitude for experimentation and innovation among the young talent in the city. "I’ve only been in Amsterdam for six months, but you do feel that the young talent has a natural passion for creative tech. Our latest hire to the interactive department even recently had an NFC chip implanted in his hand to open the office doors without a keycard and is exploring further ways to use the technology and chip for other life hacks. So there's that..."

And the local pool of digital talent is set to get stronger yet with the news that MediaMonks is set to launch a digital academy in collaboration with Hogeschool van Amsterdam (University of Applied Sciences).

Looking to the future, Amsterdam is set to benefit from the growing appetite among brands for innovative solutions for their marketing and business problems. But, says Diederik, this innovative track record has been built on bravery and risk-taking as much as it has on smarts. “Amsterdam has always been a hub for great innovations, for pushing things further and looking at challenges from unexpected angles. The more brands and agencies that seek innovative ideas, the more they are forced to realise it involves taking a leap of faith. Doing something no one has done before, literally means: no one has done it before.”