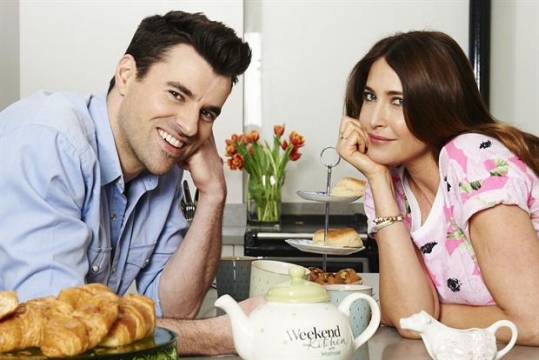 Channel 4 has confirmed a substantial 14 episode recommission of Weekend Kitchen with Waitrose – the first time an advertiser funded programme in the live cookery genre has been renewed by the broadcaster.​  This recommission will see the show build on the success of its initial 12 week run on Channel 4, and will confirm the series’ place at the heart of the broadcaster's Saturday morning schedule.

Weekend Kitchen with Waitrose, a 60 minute Saturday morning lifestyle and cookery programme produced by Spun Gold, on Channel 4, maintained a strong weekly audience across the first series which launched in April and attracted an increased share of ABC1 viewers to the channel in its time slot.

Rupert Ellwood, Head of Marketing Communications, Waitrose, says: “We’re very pleased to be going ahead with the second series. The first run informed and entertained viewers as well as helping us to reach our target audience. Traditional advertising is still crucial but this TV format gives us a chance to connect with viewers in a meaningful way. There was also the added benefit of some great sales uplifts on ingredients featured by celebrity chefs in their recipes.”

Jonathan Lewis, Head of Digital & Partnership Innovation, Channel 4, says: “We’re committed to exploring bold and creative programme funding models by working with premium partners like Waitrose to develop long term partnerships of scale that ultimately deliver more than a TV show, but an extension of the brand.”

David Sayer, David Sayer, Head of Daytime, Channel 4 says: “We’re delighted to welcome Weekend Kitchen with Waitrose back for a second series, the show has proved a great fit for Channel 4’s Saturday morning schedule with Steve and Lisa the perfect combination to present the show.”

Nick Bullen, Managing Director, Spun Gold, says: "When we developed the show, we recognised very quickly that the partnership with Waitrose could deliver a high quality show to Channel 4.  The programme has proven to be both engaging for viewers and an innovative content partnership for Spun Gold, Waitrose and Channel 4.  We’re excited to build on the success of series one and we’re looking forward to producing more dynamic new content right through to the end of the year.”​

The innovative branded content format, developed by Waitrose and Spun Gold for Channel 4, will return later this year.  It will continue to focus on food, and entertainment, while expanding on its lifestyle content.  As well as featuring celebrity guests and world-class chefs which have already featured, such as Michel Roux Jnr, Jason Atherton and Theo Randall, the series will profile young artisan food producers, celebrities’ family recipes, gardening, homeware tips and features to coincide with seasonal events such as Halloween and Christmas.

Lisa Snowdon and Steve Jones will remain as the show's hosts with TV and radio personality and Angellica Bell continuing her role as a reporter.  This new run of the hour-long show builds on the programme's initial run from April to July 2014.

Episodes will be repeated at 11am on UKTV’s Good Food Channel the week following broadcast on Channel 4.