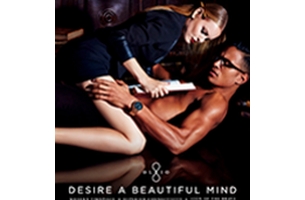 Steve Jacobs, founder of OLIO Devices in San Francisco, saw that wearable technology created in exquisite taste did not exist. So he mobilized a handpicked team of stylists, animators and engineers from NASA, Apple, Pixar and Movado, tasking them with making OLIO's modern, connected timepieces sexy.

To capture this essence, the agency turned to the visual genius of Christian Ferretti, who gained acclaim shooting several of Tom Ford’s recent campaigns. Having previously worked under David LaChapelle, Steven Klein, and Annie Leibovitz, Ferretti’s photography is the modern day essence of sexual energy.

Steve Jacobs, founder of Olio, says, “In the Olio world, whether it be fashion or tech, or any other industry for that matter, men and women should be formidable equals, challenging each other, respecting each other, because from the depths of respect is where attraction is bred.”

This campaign represents a substantial style upgrade to the wearable category. It’s a fusion of tech excellence and high art blended into one. Two very different worlds, connected technology and fashion meld together in a way that feels emotionally significant. An OLIO Device is intended to challenge your sense of “being present” and living life to it’s fullest.”

"Our mission with this campaign was to inject style and sophistication to the wearable category, where previously smartwatches never had the connotation of being stylish, or sexy, and we wanted to change that,” adds Jacobs. “Never using the word smartwatch, in coordination with Libby Brockhoff, Franklin Tipton, and the creative team at Odysseus Arms, we wanted to capture the Olio world, where men and women are desired equals. Where attraction and respect go hand in hand. A world where we desire a beautiful mind.”

“This campaign stretches the boundaries of the wearable category. It’s constantly evolving, and we’re trying to stay one step ahead,” says Jacobs.