We Think You’ll Love This Ray-Ban Film About Love, Relationships and Phones

Film from director Bo Mirosseni, Never Hide Films and The Devil You Know sees a couple get rid of their devices in amusingly impulsive ways 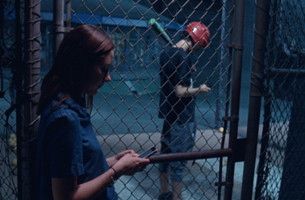 Ray Ban / Never Hide Films recently released “Glue”, a short film about love, relationships, and phones. Director Bo Mirosseni of The Devil You Know wrote and directed this short piece showing a couple’s life being consumed by their electronic devices until their lives become impossible. The resulting confrontation leads them to get rid, in rather impulsive and amusing ways, of every single device around their house.

“I'm not 100 per cent anti devices. I think they are able to help improve our lives in certain ways. However, we have become dependent on our phones for the wrong reasons. People are forgetting how to talk to each other in person, we become so anxious to check Instagram or Facebook that it causes disruption within each other.  If you really stop and look around you, EVERYONE is on their phone at all times.  It's pretty bizarre.” says Mirosseni.

Mirosseni’s subtle look at human interaction with the detail, tone and subtleties of performance is the hallmark of his work, He’s a master in capturing peoples’ melancholia, thirst for sincere emotions and real life matters. Utilizing a tone of his own that could be described as “comedic drama”, Mirosseni finds a way to smile at serious topics by shooting just the right details and holding on an action for longer than we may expect.

“Glue” was shot on film (16mm), a creative decision that supported strongly the message of the film - the choice film over digital, flaws over perfection, life over the virtual.

“Bo’s work is extremely personal, yet it speaks to every human being because it reaches out to what we all have inside of us: the need to love and be loved”, says EP Simon Wallon from The Devil You Know. “He is an amazing film maker whose work goes far beyond commercials and music videos, because he truly has something to say about his world.”

Like a lot of brands today, Ray Ban invests in supporting directors. For the recent #campaign4change, the brand financed two films from two different directors, which they paired with two brands (Anderson Paak for Glue). “We’re thrilled to see that more and more brands today understand how much they can gain from financing short films, or creation to a larger extent. It allows us to produce exciting content and it allows them to make something that really counts while serving their image”, said Wallon.