‘We Don’t Want to Be in a Box’: Unilever Plans to Ditch Gender Cliches with #Unstereotyped Movement

Awards and Events 369 Add to collection 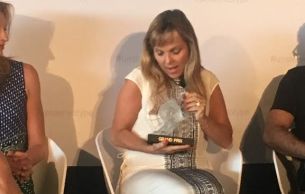 The ‘mum’ who just loves sniffing laundry. The incompetent manchild ‘dad’. The pneumatic, lobotomised sex kitten. The teenage boy that thinks of nothing but sex (but just with women, of course). The heterosexual macho hunk. Stereotypes may provide handy shortcuts for uncreative creatives trying to shoehorn a story into 30 seconds, but they also pump rigid – and increasingly irrelevant – messages about gender into pop culture and society.

But last week at Cannes the world’s second biggest advertiser, Unilever, announced that it was committed to scrubbing gender stereotypes from all of its brands’ advertising.

According to Aline Santos, speaking after the panel, the #Unstereotyped movement is the culmination of two years’ worth of work – but the marketing team had been thinking about how to change the status quo for some time before that.

It also involved in-depth research – that found, among other things, that only 2 per cent of ads feature intelligent women and only 3 per cent feature women in positions of leadership or professional roles.

“We codified everything,” she said. “For two years we studied the evolution of women in society, what’s going on with men in society from a more anthropological perspective. It wasn’t about, ‘what do you think about Knorr?’ It was: ‘what’s happening with you as an individual?’ For men and for women we got the same answer: please be more respectful, we don’t want to be in a box and we don’t want labels. Today I can be a woman, tomorrow I might even be a man.”

And that rejection of stereotypes was even stronger among younger generations. “When you talk to millennials they are even clearer about that. They don’t want us to stereotype them in any way. You stereotype them, you lose them.”

The announcement came the same week that Unilever and Mindshare Mumbai picked up the coveted Glass Lion Grand Prix for their 6 Pack Band project for Brooke Bond Red Label Tea. The brand created a pop band in which all of the members are transgender and it has been widely embraced in India.

“It’s amazing. This particular Lion is so special,” said Santos. “India is a melting pot of so many different people and problems. There, you have these brilliant creatives that allow themselves to be more creative and push the boundaries. It’s amazing. This particular Lion is so special. To create a band of transgender people in India, you have to admit, is quite bold! I think what people loved about the ad is that we were courageous and we were talking about minorities and people wanted to be part of it.”

And it’s not the only recent piece of Unilever work that’s been deconstructing rigid gender roles. The Axe ‘Find Your Magic’ campaign from 72andSunny Amsterdam celebrated a more fluid, personal and diverse perspective on masculinity. And in a nod to the struggle to elevate more women in creative agencies, Santos also noted that the Axe campaign had a large number of very passionate women working on it.

Oh, and it boosted sales to boot. In fact, aside from the ‘social good’ element of #Unstereotyped, there’s also a cold hard business rationale to it, as Unilever’s Keith Weed pointed out.

“We did a piece of research that found that yes, there was a lot of stereotyping going on, but more importantly when we segmented the ads we found that the more progressive ads had higher impact, higher involvement, higher engagement. If you’re going to create an ad, wouldn’t you want to create an ad that had higher impact, higher involvement, higher engagement?” he asked. “So, I think this is beyond just being a moral issue or a societal issue, this is an economic issue.”

Unilever has undoubtedly made a bold move with #Unstereotyped, but Santos argues that she doesn’t want this to become a point of difference and would love more brands to follow suit.

“We are trying to open up to everyone. We are giving interviews. We really want to inspire people to do better, it’s not about having a point of difference. This is something that everybody should be doing. We need to be a little bit smarter to differentiate ourselves. The more people who join the better,” she said.

While the marketing world still has a long way to go (if proof were needed, check out the Brazilian Bayers ad that won a Bronze Lion last week, was condemned by Cindy Gallop and swiftly pulled), Santos also noted that ‘change was in the air’, both within Unilever and the wider industry.

What’s more, she pointed out, if large corporations can invest time and money into portraying a more progressive and fluid approach to gender then perhaps they will drag Hollywood along with them

“The Geena Davis Institute has been doing this work for years, they are very serious and totally right in what they are doing, but the inertia in Hollywood is shocking,” she said. “It’s going to be very funny if an industry like ours starts moving things forward. Unilever is the second biggest advertiser in the world, but we want to use our money in a way that is more positive for the business and also for society. Hopefully we can teach a lesson to Bollywood and Hollywood and they will start changing as well, because otherwise they will be so outdated. Imagine if advertising starts to be so much more progressive and Hollywood keeps relying on old stereotypes, they will lose so much of their audience.”