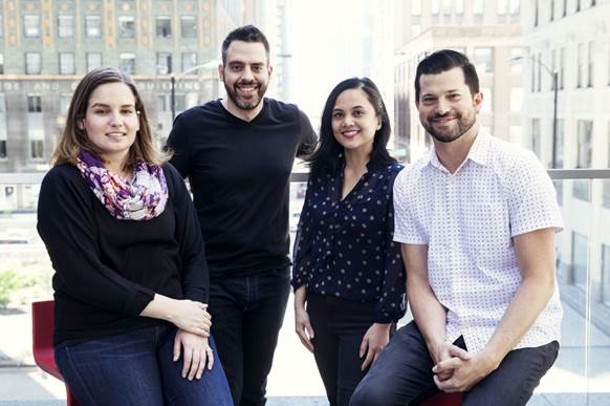 We Are Unlimited, part of Omnicom Group (NYSE: OMC), announced today that four new creatives have joined the agency’s growing team. Globally experienced Cristina “Tin” Sanchez joins as Group Creative Director, award-winning creative partners Jimmy Dietzen and Josh Mizrachi join as Creative Directors, and the multitalented creative Kat Dudkiewicz has been hired as an associate creative director. All four creatives are reporting to Unlimited’s Chief Creative Officer, Toygar Bazarkaya.
Toygar said, “We Are Unlimited is a new kind of agency, driven by collaboration and breaking from the traditional agency model. Our recent success at the international award shows is an indication of the extremely talented team we have working together at the agency, and of what you can expect from Unlimited. I couldn’t be more excited that we continue attracting top creatives from Chicago and around the world, building on the agency’s momentum.”
Tin has been in the industry for twenty years and has worked at large agencies across the world including New York, London, Manila, Ho Chi Minh City, and Kuala Lumpur. Most recently, she was SVP, Creative at DigitasLBi in New York. She gained global experience developing work for a variety of brands including Johnson & Johnson, Wrigley, and Unilever, among others. Tin is also very accomplished, becoming one of the youngest Executive Creative Directors in Asia at age 28, and winning numerous awards for creativity and effectiveness, most notably the Philippines’ first-ever Gold Cannes Lion.
Creative team Jimmy and Josh come to Unlimited as Creative Directors. Previously, the pair worked together at Leo Burnett where they helped launch the highly awarded “Mayhem” campaign for Allstate, and at BBDO Jimmy created the popular “Give Extra, Get Extra” campaign for Wrigley’s Extra Gum. Prior to joining Unlimited, the partners were VP/Creative Directors at Cramer-Krasselt developing creative for Pacifico Beer, Heinz, and BIC, among others. Jimmy and Josh’s work has won at every major award show including Cannes, D&AD, The Effies, and The One Show.
Additionally, Toygar hired Kat Dudkiewicz as Associate Creative Director. Kat has worked at top agencies such as FCB New York, Droga5, Leo Burnett, and Crispin Porter + Bogusky, which is where she got her start working on Burger King, Domino’s, and Coke Zero. She joins Unlimited from Highfield in New York where she oversaw creative for Hilton Hotels and the Swedish clothing brand Gant. As one of the first employees at the start-up agency, Kat helped create the agency’s first work, which was a social video series introducing Gant in the U.S.
Tin, Jimmy, Josh, and Kat are the latest creative hires made by Toygar. In March 2018 We Are Unlimited announced the hire of three creative teams: Chris Moreira and Mark Schöller; Augustus Sung and David Stevanov; and Kristen Manias and Allison Bulow. Unlimited’s creative for McDonald’s has generated buzz within the industry and received multiple recognitions including six Pencils, three of which were Yellow, at the D&AD Awards, and six Lions, one of which was a Gold, at the Cannes Festival of Creativity.
view more - Hires, Wins & Business