We Are Social Redraws the Globe According to Cannes 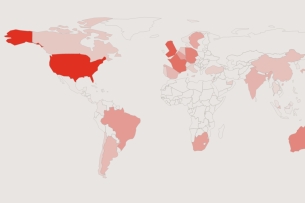 In the run-up to Cannes Lions, global agency We Are Social has created the ‘Cannesogram’– an interactive cartogram that reveals how countries have performed over the last ten years.

The countries are displayed with a combination of colour and size changes according to how successful they have been in the revered adland awards. Users can drill down into many of the categories represented in the Cannes Lions: International Festival of Creativity and use a timeline to find out which countries were most successful in specific years.

Hovering the cursor over a specific country brings up its record of Cannes Lions wins in the selected year and category - Grand Prix, Golds, Silvers and Bronzes.

James Nester, Creative Director at We Are Social and a Cannes Lions Cyber judge for 2015, said the exercise provided an illuminating insight into global creativity:

“There’s always a lot of debate about which countries do best. So we thought we’d use data to show the world according to Lions wins. It’s fascinating to see how fast the creative landscape has changed. And it’s revealing to see that different countries consistently own different categories.”

We Are Social’s interactive cartogram is based on data from Cannes Lions: International Festival of Creativity, between 2005 and 2014. Among the interesting patterns it reveals are:

· Cyber is consistently dominated by the US, Europe and Japan.

· Film is still a category the UK rules, alongside the US.

· Outdoor is ruled by Brazil, with Europe also performing consistently.

· The UK and Europe have been doing well in the relatively new category of PR.

· South Africa is the king of radio.

· Awards have been more widely spread as the decade progressed. While US remains strong, countries like Russia, Turkey and the UAE have made it on to the map. South American countries have also shown in a post-2011 spurt.

The Cannesogram is available ahead of this year’s Festival, which runs from 21-27 June http://wearesocial.net/cannesogram/