We Are Social for Siemens Graduate Program

Set to use Tumblr campaign to reach world's brightest minds 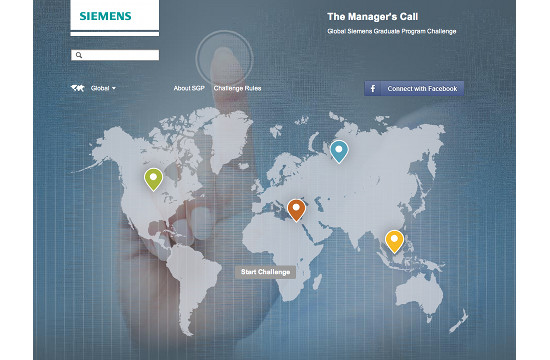 The Siemens Graduate Program has teamed up with global social media agency, We Are Social, to launch a global social recruitment campaign.

‘The Manager’s Call’ will use Tumblr to identify the brightest minds across the Americas, the EU and Russia, the Middle East and Africa, and Asia and the Pacific, while driving interest in Siemens and positioning the Siemens Graduate Program as a cutting edge career opportunity for the managers of tomorrow.

The campaign, which runs all summer until September, uses Tumblr to create global debates across a wide range of subjects like future of work and workforce, business and career insights. Participants of the Siemens Graduate Program can upload blog articles to the Tumblr site, based on selected topics each week. Each post is tagged with the writer’s location, as well as a hashtag describing the subject they are writing on, such as #roleofwomen and #socialrevolution.

The campaign also allows anyone to get involved in the debates, by introducing a gamification element to the Tumblr: Via their Facebook login users can simply plug into the discussion by connecting to the blog and start commenting and liking posts.

Participants will be awarded points for commenting, as well as if others ‘like’ their comments. Medals will also be awarded each Sunday to the previous week’s top participants. At the end of the campaign, those with the most points and medals will have a chance to win a place at an exclusive Q&A session with a Siemens manager and a personal career-coaching session.

The campaign has been created and will be managed by We Are Social, and represented by ‘The Manager’ - a figure which is leading and following the discussions between the participating parties. Facebook advertising focused on new graduates and those about to graduate will support the campaign.

Julia Jank, Head of the global SGP Team at the Siemens Graduate Program said:  “This is a great way for young people all over the world to make themselves known to Siemens, as well as exercising their debate skills in a unique, global forum. It’s fascinating to see alternative perspectives on the same topic emerge from each different region.”

Thomas Hirschmann, account director at We Are Social said: “This campaign generates interest in the Siemens Graduate Program by tapping into social behaviour that already exists. Tumblr is increasingly popular with a young audience, and people are already sharing and commenting on content on the platform, so it was the natural choice for this campaign.”

Potential participants can find out more about the Siemens Graduate Program through its Facebook page or on the program’s website.