We Are Social Captures Festive Spirit with Lenovo #Holiday360 Campaign 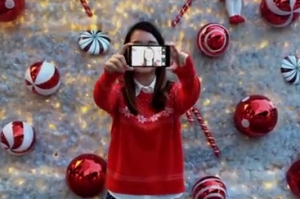 Global social media agency We Are Social is launching a video-focused social media campaign for Lenovo that taps into the ‘selfie’ phenomenon to capture the end-of-year festive spirit all over the world.

#Holiday360 asks Lenovo fans to capture the unique buzz in their town or city during the holiday season by creating a ‘360° selfie video’, and then share it with the rest of the world.

The campaign, aimed at driving a deeper level of engagement and collaboration between Lenovo and its social community, leverages the current selfies trend. According to Twitter, the term ‘selfie’ received 92 million mentions among its 284 million active users in 2014, a 500% increase over 2013. Google estimates more than 93 million selfies are taken each day.

Fans can get involved in the mass content sharing campaign on Lenovo’s Facebook, Twitter or Instagram by uploading their 360° selfie video along with their name, country and city, mentioning the hashtag #Holiday360 and @Lenovo. Lenovo will then curate the global community’s uploads into one complete video to create the world’s first global 360° selfie.

#Holiday360 is the fourth iteration in a series of multi-platform activities launched by Lenovo to reinforce the ‘Do’ attitude the brand shares with its community - doing what they’re passionate about, or taking the first step towards trying something new.

Rod Strother, Director, Lenovo said: “This campaign is globally accessible, taps into current online behaviours and fits perfectly with Lenovo’s brand identity. We’ve found that our community enjoy sharing their own content with us, and as such, campaigns like this where fans are empowered and can express their creativity generate high levels of participation and engagement.”

Sharim Gubbels, Creative Director, We Are Social said: “Selfies have kept evolving over the years, and in this case we wanted to shift the focus to the festive surroundings as much as the people themselves. It’s fascinating to see how different countries and cultures celebrate the holiday season; Lenovo will help its community create a truly social, global celebration.”

Creative Agency: We Are Social