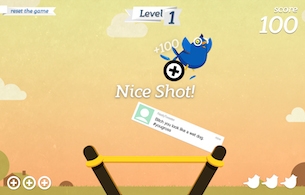 Concept-oriented design & digital production studio We Are Royale recently collaborated with ad agency Hill Holliday on a Twitter-based game called #PositivATI. The app is part of a new multimedia campaign for Partnership for Drug-Free Kids, a national nonprofit dedicated to reducing substance abuse among adolescents. The “Who Controls You” campaign breaks this month and was created pro-bono by Hill Holliday and award-winning social media influencer Maris Jones as part of the Partnership’s Above the Influence (ATI) teen program.

#PositivATI gives teens a way to counter the negativity in social media with a little positivity through a simple shooting game; it pulls in real, negative tweets directly from Twitter, which users shoot down for points. For every negative tweet that is knocked out, a positive tweet goes into the thread of the negative hashtag, disrupting the stream of negativity.

#PositivATI is accessible via a website, and will also be used for future community forums and events in a larger installation format. The game was first featured as a part of National ATI Day in Washington, D.C. in October. You can play #PositivATI at http://positivati.com/.

For We Are Royale, led by Head of Digital Production Beck Henderer-Peña and Creative Director Loren Judah, the goal was to create an approachable arcade-style game that would not only work across many different devices, but also would engage a wide demographic of people with its gameplay.

“It was important for us to come up with a game aesthetic that people could easily understand and jump into at any moment,” explains Judah. “We felt the classic arcade game idea would be more accessible; however, we also took modern cues through the use of color and various design elements, such as the tactile, painterly quality of the environment.”

The challenge was figuring out how to dynamically animate everything; more specifically, working with the design team at Royale to create traditional animation that was then brought into the game world, which was built in HTML 5.

“We’re always trying to push higher levels of animation within web experiences,” says Henderer-Peña. “We had to take into consideration the different contexts in which this game would be played, from iPads and iPhones, to TVs, online and even large events. It was about finding that sweet spot between the positive messaging, gameplay mechanics and a fun experience that everyone would enjoy on any device.”

“The team at Hill Holliday understood the framework and everything going into the game, so we could have honest conversations about how it was being built,” concludes Judah. “This was definitely a partnership in making the best game experience. Their flexibility and trust allowed us to be as creative as possible.”

The TV and online portion of the “Who Controls You” campaign uses a unique depth of field visual device, combined with Maris Jones' signature stop motion storytelling. Five :15 vignettes each highlight the different types of peer pressure teens face relating to drug and alcohol abuse, body image issues and bullying. A :30 compilation spot comprised of the same vignettes shows a teen who rises above the influence of drinking at a party.

App/Digital Production: We Are Royale