The result of the experiment is a live ‘train remix’ recording of Synthi, a new track due to be released by Mount Kimbie later this year 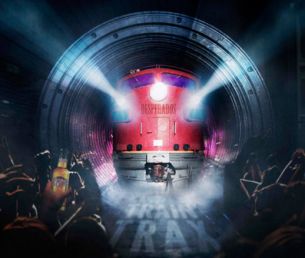 Desperados has taken wild experimentation in music to the next level by creating ‘Train Trax’. Working with the renowned electronic music group Mount Kimbie, Desperados turned an ordinary train in Warsaw into a gig scene for fans from across the globe.

The train became a hub of innovation. It was rigged to become one of Mount Kimbie’s instruments, shaping the track they recorded live. External RFID sensors were placed at specific points on the train track, so when the train passed them, a sensor on-board converted the signals into musical notes, which the band integrated live into the music. The crowd had an active role, by interacting with some of the train’s features like the lights on-board and cameras. The speed of the train also dictated the BPM of the bass drum itself, so when the train sped up, so did the beat of the music.

The result of the experiment is a live ‘train remix’ recording of Synthi, a new track due to be released by Mount Kimbie later this year, along with a video of the full Train Trax experience in action:

One half of Mount Kimbie, Kai Campos said, ‘the experience was insane as it was a whole new area of music experimentation we’d never played in before. Seeing how the crowd and the train itself shaped our set, made it a completely unique gig. The reaction from our fans was incredible.”

Anna Bizon, Global Brand Director, Desperados, said: “At Desperados, daring to be different is in our DNA. Train Trax pushed us and Mount Kimbie to a new and previously inconceivable territory of musical testing, giving our fans a new way to experience the best in music. We turned the journey into the destination.

Train Trax is the next act of ‘Release your Inner Tequila’, our global marketing campaign where we’re investing in a series of unique experiences to foster wild experimentation in music.”

Patrick Garvey, Founding Partner, WE ARE Pi, said: ""Train Trax is the latest wild experiment to be born from our great relationship with Desperados and Heineken. After Bass Drop and House Party, it's yet another case of delivering brand acts not ads for our audience and we are very proud"

The campaign’s second activation released late last year, Bass Drop, saw Desperados bring together DJ group, the Barong Family, and neuroscientist, Daniel Levitin to create the ultimate bass drop – in a plane 30,000ft above the Nevada desert. You can watch the video here