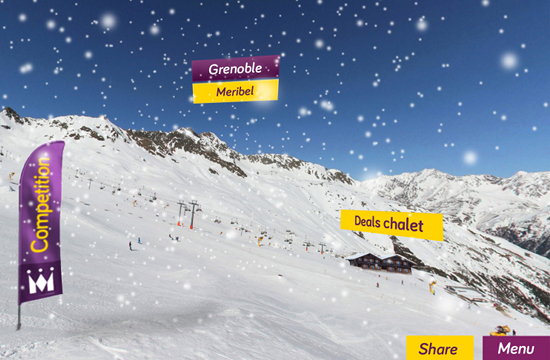 It uses leading-edge, cross-platform technology to ‘bring’ consumers to the Monarch Mountain, a 360 degree virtual reality guide to the great ski resorts accessible via Monarch’s routes.  The campaign is a core element in Monarch’s strategy to become the ‘go to’ airline for independent (and digital savvy) skiers.

Visitors to the Monarch Mountain will find themselves transported to a stunning virtual ski slope, with high quality graphics and a 360 degree ‘Photosphere’ view complete with realistic falling snow and sound – all aimed at building excitement in independent skiers around the coming ski season and creating the desire to plan and book their next ski trip with Monarch.

WDMP has created the campaign using technology which doesn’t require consumers to download an AR reader to enter the Monarch Mountain, making it accessible with one click from any tablet, smartphone, laptop or PC.  This removes the traditional barriers to AR and significantly opens up the potential audience as a result.  In addition, this functionality makes it very easy for visitors to share the excitement and experience of the Monarch Mountain through social media – and their friends will themselves be able to access it with one click, whether they are on the bus, on the sofa or in front of their computer.

Navigation around the mountain is made easy and fun by simply moving and tilting a smartphone or tablet to travel around and access new areas.  By touching icons, consumers can visit each of the great ski resorts accessible via Monarch’s routes and find out what they need to know to make an informed decision about the best destination for their own ski trip.

On the Monarch Mountain, visitors can also watch ski tip videos from the Ski Club of Great Britain, access the latest snow reports and enter a ‘Postcard’ competition to win free flight tickets which encourages sharing of the campaign by ‘posting’ a virtual, personalised postcard to friends via social media.  Another feature is a live price feed so visitors can see flight prices in real time and easy click- through to the Monarch website to book.

Monarch’s virtual Mountain is part of a direct campaign that starts with a teaser email to make people look out for something exciting in the post, which is followed by an elegant, magazine-style mail pack full of useful information for the independent skier about Monarch ski routes. The pack also feeds their curiosity, directing recipients to find out more about the Ski resorts they can fly to by visiting the virtual world of the Monarch Mountain.

The third phase of the campaign reaches out to non-responders who are sent a follow-up email encouraging them to book.

The campaign is being targeted at both ‘bookers’ and ‘lookers’ - last year’s Ski bookers but also ‘lookers’ who viewed Ski pages on the Monarch website but didn’t go on to actually make a booking.

Liam Gibson, Direct Marketing Manager at Monarch Airlines, comments, “Last year’s campaign used Augmented Reality to create the ultimate ‘Destination Inspiration’ experience for Skiers and in doing so, our best performing Direct campaign. This year we are pushing the boundaries even further by using the latest technology to put our curious and digitally savvy independent skier right on the ski slope .”

Craig Wheeler, Managing Director at WDMP adds,   “As a relatively new entrant to the ski market Monarch needs to stand out, be known for something amongst the ski community but also reach a bigger audience than its own prospect pool through social sharing.  We believe by combining insight into how independent skiers research their next holiday with the very latest in innovative technology this campaign meets all these requirements and creates a unique experience that is inspiring, exciting and highly shareable.”

This campaign builds on activity created by WDMP to enhance consumer experience at the Ski and Snowboard Show in Manchester and London, sponsored by Monarch, last month.  Once again, the agency looked to the very latest in technology, using Oculus Rift goggles for the very first time in the UK.  Visitors to the Monarch stand could try out the goggles and experience the adrenaline rush and thrill of ski jumping with graphics and experiential technology that made the experience feel real.