WCRS Shows us How to Respond 'When Flavour Calls' 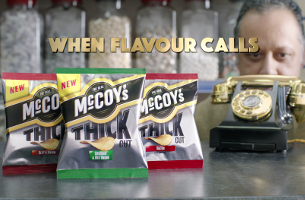 McCoy’s – the nation’s number one ridged crisp – isback on TV screens today with a new creative that introduces their newfully-flavoured flat crisp; McCoy’s Thick Cut. The work continues to positionMcCoy’s as a brand that’s famous for delivering on flavour and builds on the‘When Flavour Calls’ campaign that was released in March earlier this year.

Livefrom 19th September, the new advert communicates how McCoy’s ThickCut delivers superior flavour by showing viewers what would happen if ‘Flavour’literally were to call our main protagonist, Gary. It will feature acrosspopular TV networks – ITV, Channel 4, Channel 5 – and across digital channelsand online throughout 2016. As well as the heavyweight above-the-line campaign,McCoy’s will be driving further visibility in-store and in-depot via a raft ofeye-catching display solutions.

Jeff Swan, MarketingDirector at KP Snacks, said: “Building off the back of ourhugely successful ‘When Flavour Calls’ campaign that went live in March, we’redelighted to be launching our new Thick Cut product. We wouldn’t launch a flatcrisp unless it was true to McCoy’s belief in being full on Flavour, so we’repleased flat crisp eaters can now enjoy a thicker crisp that is moresatisfying!”

Billy Faithfull, Executive Creative Director at WCRS said: “It’s a well-documented fact that people are fed up with the wispsof crisps their usual flat crisp brand offers them. So When Flavour Calls witha properly flavoured, properly thick cut flat crisp, you answer, especially ifyou’re a man named Gary, and you’ve got a brain and you’re not afraid to useit.”