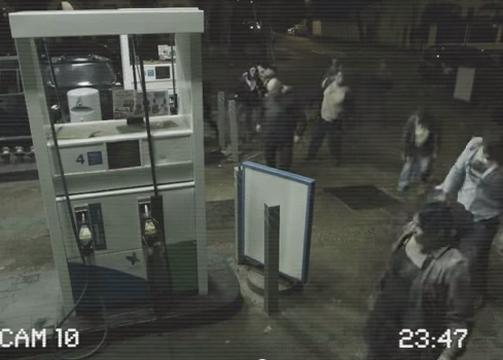 On the 13th October, the new season of the zombie thriller The Walking Dead arrives on Fox, available on NOW TV – Sky’s internet TV service. To celebrate its arrival, NOW TV and creative agency WCRS have created a film which brings the zombies of The Walking Dead to service stations nationwide.

Using Amscreen media placements at the counters of petrol stations around the country, the advert mimics CCTV footage, making the viewer believe they are looking at footage of the petrol station forecourt. Gradually, the forecourt is overrun with wandering zombies chasing customers away from their cars, and causing chaos and mayhem wherever they turn. The advert then directs viewers to NOW TV to watch the new season of The Walking Dead.

The advert launches on 9th October in 450 service stations nationwide, and features over 20 zombies from re-enactment societies across the country.

October, the new season of the zombie thriller The Walking Dead arrives on FOX, Jana Mollett, Marketing Controller, NOW TV, comments: “When WCRS presented the idea we were immediately on board. We’d run activity with Amscreen recently and this seemed like a fantastic and innovative way of utilising the media to deliver standout and talkability. We’ve also amplified the activity in social and with a competition giving a lucky winner the chance to appear in the film.”

Simon Robinson, Creative Director, WCRS, comments: “I’ve loved the idea of playing with CCTV in petrol stations and getting people to double-take on what’s going on outside the safe confines of the forecourt shop. We hope it will surprise and entertain people while they wait to pay for their unleaded.”

Jamie Lindsay, Managing Director, Amscreen adds: "We are delighted that Now TV are creating innovative ways to communicate with customers on the Amscreen network. We also look forward to doing something we have never done before: using our platforms to bring The Walking Dead to life!"