WCRS Hijacks the Welsh Flag in a Fight Against Skin Cancer 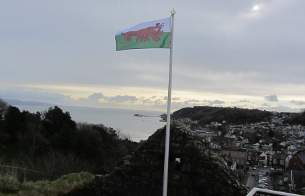 Today, 1st March, marks the launch of ‘Don’t Be A Lobster,’ a hard hitting campaign created by WCRS for Welsh charity Skin Care Cymru, aiming to raise awareness of skin cancer in the run up to the summer months.

Skin cancer is now the 6th most common type of cancer in Wales with 784 new cases diagnosed each year. In just ten years, skin cancer diagnosis rates in Wales have risen by 63 per cent in total – by 86 per cent for men and by almost half for women (44 per cent)*.

Coinciding with St. David’s Day, the ‘Cymrustacean’ - which depicts a lobster - will replace the Welsh flag’s iconic red dragon until the 10th March across thirty famous Welsh landmarks including, Pembroke Castle, the Guildhall in Swansea, the Wales Millennium Centre in Cardiff and the Visitor Centre at Llanfair­pwllgwyngyll­gogery­chwyrn­drobwll­llan­tysilio­gogo­goch.

The campaign also sees support from Lord Mayor of Swansea, David Hopkins, who raised the ‘Don’t Be A Lobster’ flag at the Rotunda flag pole outside the Guildhall in Swansea on 28th February, and Nick Ramsay, Monmouth AM and Chair of Assembly Public Accounts Committee, who will be asking the Welsh Assembly to fully back the awareness campaign.

For more information about skin cancer and skin conditions across Wales visit: http://www.skincarecymru.org/.

Paul Thomas, Chair of Skin Care Cymru: “We've all been blown away by WCRS’s creativity, hard work, professionalism, doggedness and generosity. No one could have done more or better. It's been a real privilege to have the team made up of WCRS and MHP working on our behalf.”

Dr Avad Mughal, Dermatologist and Trustee of Skin Care Cymru: “Campaigns like this are so important to remind people of the dangers that over-exposure to the sun can have of your skin. Although Wales is often synonymous with rain, even when the sun isn’t shining, the UV rays can penetrate your skin, heightening the risk of various skin cancers. You should always wear at least SPF 30 to protect your skin.  You don’t want to look like a lobster, but more importantly you don’t want to heighten your risk of skin cancer by not being properly protected.”

Ross Neil, Executive Creative Director, WCRS: “By taking a well-known symbol of sunburn like the lobster and swapping it for the Welsh Dragon at a time we know Welsh eyes will undoubtedly be on their national flag, and launching this on the first day of spring – a time of year when surfers and other at risk groups head back outdoors – we hope to raise awareness for Skin Care Cymru’s initiative but also raise a smile at a time of celebration for Wales."