WCRS Counts Down To Christmas in Whimsical Sky Spot

The magical spot is directed by Blinkink's Noah Harris 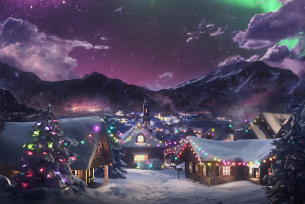 Sky Cinema has revealed its 2016 Christmas TV advertising campaign. In what will be Sky Cinema’s first Christmas campaign since its successful relaunch from Sky Movies. Audiences will be taken through themed advent calendar doors, providing a glimpse at some of the world famous movies that will premiere on Sky Cinema throughout the festive season: Jungle Book; The Revenant, Deadpool and Zootropolis - all part of Sky Cinema’s ‘New Premiere Every Day’ offering.

The enchanted campaign is fronted by a 40” spot which will air during Saturday’s X Factor show. The ad opens on a snowy Christmas town, lit by a glowing night sky. It then proceeds to take the audience on a journey through an advent calendar; first to a scene from the Jungle Book starring Mowgli, Baloo and Bagheera, on to the cold depths of The Revenant forest, moving on to Deadpool fighting for his life and finally an advent door opens to Zootropolis characters - Lt Judy Hopps and Nick Wilde - making their escape.

With two further 20” spots, the campaign welcomes us into the exciting world of Sky Cinema, where customers can watch a new movie premiere every day along with over 1,000 movies all on demand. The advent calendar creative therefore lends itself perfectly to the campaign.

Created by WCRS and directed by Noah Harris – who has previously directed work for Asus and Google – the intricate scenes featured in the advert have been specially created using both hand-drawn and CGI animations, as well as combining new and existing footage from filmmakers across the globe.

Visual effects specialists nineteentwenty were tasked with creating the advent calendar and its magical wintery world. They created a seamless camera move combining new and existing footage from filmmakers across the globe.

A team of animators, crew, and producers brought the enchanted advent calendar to life. Each animation required a huge number of man-hours with the team dedicated to produce this stunning animated advert.

Ian Lewis, Director, Sky Cinema commented: “This year’s advert builds excitement for Sky Cinema over the festive period for the whole family. We wanted to provide a glimpse into the magic of the movies we have premiering every day during December, and throughout the year. Our aim is to remind viewers of the magic of movies at Christmas.”

Leon Jaume, Executive Creative Director at WCRS said: “How do you like your advent calendar? Chocolates in cardboard or a cinematic blockbuster bursting out of every door suspended in a dazzling night sky above a snow covered village. We incline towards the latter and thanks to Noah Harris and his Christmas elves working around the clock, that’s what we’ve got. Happy Christmas.”

Ludo Fealy, Co-founder and VFX supervisor at nineteentwenty, comments: “This was a great project to be a part of, but like all good briefs – this one presented some unique challenges! One long camera move is tricky in any form, but one that must seamlessly link between cameras and lenses from different movies bought a much bigger challenge. The fact that it all takes place in a fully CG environment is great, as it provides much more freedom.”

Producer Joshua Smith at BlinkInk comments: “We had two amazing teams working all hours in London and Bristol to create this magical world from scratch, and seeing it all come together over the last month has been incredible. We are blown away by the finished result and we could not have achieved this without nineteentwenty’s dedication to the project.”