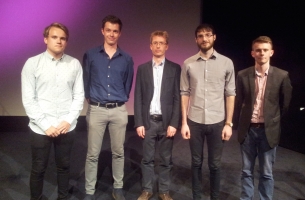 Last night saw the unveiling of the winners of the annual Waterloo Festival Film Score Competition, organised by St. John's Waterloo in London.

Young composers are invited every year to create an orchestral or electronic music score to accompany a specially commissioned short film – in this case the weirdly wonderful ‘Fare Thee Well’, directed by Adam Greves and Sye Allen.

The winners Joe Newton (piano quintet section) and Alex Blencowe (electronic) were announced as part of the live finale event at the BFI, which also saw members of Southbank Sinfonia performing the winning orchestral score.

Aaron Taffel, Sound Designer, Grand Central, comments: “The film was provided to me completely mute so it was up to me to create all the effects, voices and sound design you hear throughout the piece.  It is very rare for a sound designer to be given this freedom of creative control so I jumped at the chance.

“The focus for me was to create a series of bombastic sounds that would give cues, and challenges, to the composers – such as obstacles they wouldn’t be able to work around. The sound design has moments of real light, followed by those darker, sinister elements, where I distorted different sounds and, at one point, created a wall of noise.

“In my mind, at every step of the process, was the awareness that the entrants would be composing the score to my sound design, which was really exciting.

“Being part of this incredible project was a real honour for me and I am already hoping I will be asked to be part of it again next year.”