Watch This Japanese Music Video On Your Phone. You Won't Regret It. 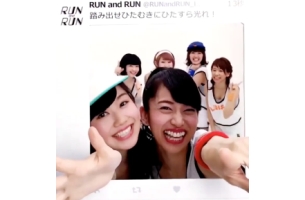 Lyrical School, a new Japanese idol group, worked with TBWA\HAKUHODO Japan on the release of their debut music video for their hit song, ‘Run and Run’.

Aimed at Lyrical School’s target audience of 10-20 year olds, who spend the majority of their time on mobile phones, TBWA\HAKUHODO decided to launch the world’s first native mobile music video, specifically tailored to be watched on mobile devices.

Through creative editing, the imaginative video gives viewers the sense that the pop idol group has hacked into their smartphones – showing the six members of Lyrical School running through the viewer’s smartphone apps.

Based on the insight that Japanese teenagers regularly enjoy watching videos on their mobile phones but prefer not to tilt their screens horizontally, the music video was shot in vertical aspect, with most of the filming done using a smartphone to imbue a sense of familiarity. No computer graphics were used – focusing instead on producing footage that could be re-created on any smartphone.

Lyrical School performs the song within the connected realms of email, private messaging, phone camera, social media, and other mobile functions that young teenagers use on a daily basis.

The video was viewed over 1.3 million times within the first two weeks of the release, and ranked #1 trending topic on Twitter in Japan.

“When we target the newest generation of smartphone users, we enter a new age of ‘mobile-only’ marketing, with the majority of media content consumed solely on mobile,” said Kazoo Sato, Chief Creative Officer at TBWA\HAKUHODO Japan. “Working with cultural artists like Lyrical School provides a great opportunity to create imaginative and immersive work, that disrupts the conventional way in which people experience mobile content.”