Watch MPC's Epic Kick-about Through the Stars for ZDF Network 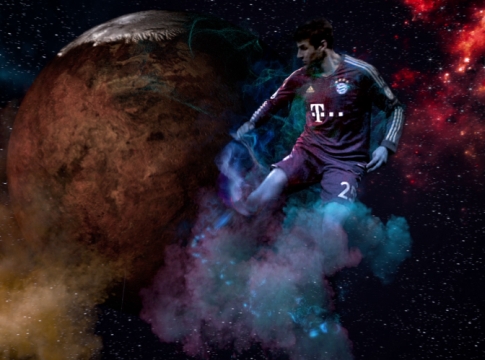 They’re often referred to as Gods, and in the new campaign for German TV network ZDF star football players take to celestial skies. Directed by Tom Robinson and Stephen Ross, who make up directing duo H Block, the 30” spot and accompanying broadcast package is an evolution of the network’s ‘Soccer From Another Star’ campaign.

In addition to directing the spot, H Block developed all VFX and completed the grade and editing themselves, marking their first major project as part of MPC Creative.

3D planets were created from NASA satellite images and the duo employed advanced particle-rendering software to create the cosmic spot. Epic action footage of footballers including Ronaldo, Ibrahimovic, Messi and Germany’s Thomas Müller and Marco Reus was altered so the sportsmen appear outlined as constellations blasting around the solar system.

H Block said, “The UCL is host to the biggest names in football and we wanted to put these god-like characters into a suitably epic space. We created the whole 30 second spot from one camera move that starts it’s journey above Earth, and follows the players as they battle for possession of a flaming Champions League Meteor - rather than football - across the galaxy. Getting the interaction between the 2D footage and our 3D particle elements was one of our main focus points, as we wanted to have particles bouncing all over the screen with each impact."

The extensive R&D process saw the duo implement Krakatoa, a new particle rending software, in the MPC Motion Design studio as well as getting to grips with ZBrush and Turbulence FD.

The Nebulae are live elements, giving the package a sense of natural beauty. These were created from a cloud tank shoot using a Phantom camera. The duo sourced NASA satellite images of the Earth and various planets, basing their 3D planets on the real thing.