Around only competitive NFL games played outside USA 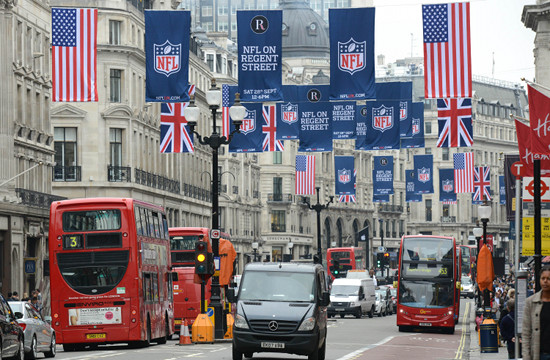 This year’s fixtures see the Pittsburgh Steelers face the Minnesota Vikings on the 29th September followed by Super Bowl XLVII finalists San Francisco 49ers against the Jacksonville Jaguars on the 27th October.

The first experience will see Wasserman produce the free NFL On Regent Street event to celebrate the game between the Minnesota Vikings and Pittsburgh Steelers. The free event, which takes place on 28th September between 12 noon and 6pm, will feature music, food, cheerleaders, team drum-lines and interactive games, along with other popular elements of American football as well as special appearances from players on both NFL sides who will take time out from their pre-match preparations to celebrate with fans.

In the build up to the San Francisco 49ers and Jacksonville Jaguars game, Wasserman will again be managing the free NFL Fan Rally in Trafalgar Square on October 27th. Sky Sports’ presenter Neil Reynolds will host the Fan Rally, which is set to be the most exciting to date. The Fan Rally will also feature live performances from the Jacksonville Jaguars and the San Francisco 49ers Cheerleaders, mascots, Drum line bands and live appearances from both sets of teams as well as a host of interactive fan experiences.

More than 40,000 fans are expected to attend the rally, where they are invited to test their NFL skills and knowledge with interactive games and activities, including the inflatable quarterback challenge and The Super Fan Trivia quiz. Fans will also have the opportunity to interact with NFL players, cheerleaders and mascots as well as buy official NFL and New Era Merchandise, experience American style food, meet NFL legends, and get up close to the Vince Lombardi Trophy, which is awarded each year to the winning team of the National Football League's championship game, the Super Bowl.

On game days at Wembley, Wasserman will be managing the annual Tailgate Party and new for 2013, the NFL Game Day Fan Plaza, which is the largest of its kind outside of the USA. This year there will be two separate Tailgate Party experiences for each game. Fans will be able to sample authentic American food and entertainment prior to both games, capturing the essence of the NFL pre-match atmosphere.

The NFL Game Day Fan Plaza, taking place on the 29th September, will be open to both ticket holders and non-ticket holders for the first time, and will span across the entire Wembley Estate. For the second game, the NFL Tailgate Party will return to the 2012 format where the experience will be largely based in the Green Car Park at Wembley Stadium and is only open to ticket holders.

To educate and attract new fans between the two NFL International series games, Wasserman will be touring London and the South East of England in a specially created mobile NFL brand experience. NFL Touchdown Tour will host a number of interactive activities and NFL assets including gaming areas, inflatable games, NFL content, the Lombardi Trophy and the All Star Cheerleaders.

Of the planned events Mark Killingley, marketing director of the NFL, said: “Every London game so far has been special. This year is doubly exciting as we move to two games and Wasserman have been instrumental in planning and delivery events that will enable the NFL to reach as wide an audience as possible. The games and the events are an opportunity for all of our UK and European fans to immerse themselves in the whole NFL experience. From the Fan Rally to the Tailgate party – Wasserman has captured what is a truly unique and authentic American experience, bringing to life the pre-match and game day atmosphere to NFL fans old and new.”

Paul Saville, Vice President of Wasserman Media Group's Experience division, said: “We have a fantastic relationship with the NFL and it’s great to be working on the International Series for a fourth successive year. With not one but two games set to be held at Wembley it gives us a fantastic opportunity to go even bigger and give the thousands of fans living in the UK and Europe a fantastic show – whether that be in London or on the new NFL Touchdown Tour, we’ve created an experience that will continue to grow the NFL’s continued success in London.”