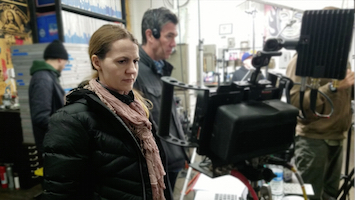 New York-based Washington Square Films has signed director Carrie Stett for her first commercial representation. With a background as a reality television producer, Stett fuses evident authenticity and a visually-driven narrative approach to her work as a director. Her award-winning work has reached viral status taking in over 120 millions views combined. She has worked with social media influencers and brands to create shows for Disney/ABC, Yahoo!, Univision, Facebook, Instagram and YouTube and has worked for such top brands as Toyota, JCPenney, Jell-O, Revlon,  Facebook and US Cellular. Stett was recently selected for the prestigious 2017 SHOOT New Directors Showcase for her heartwarming “A Caring Chorus” spot. She also helmed the powerful Kleenex spot “Unlikely Best Friends” which earned an ANA Multicultural Award. The entire Kleenex campaign, “Somebody Needs One,” earned an Effie Award and was shortlisted for a Cannes Lion.

“Washington Square Films has a very familial boutique vibe and their slate of docu-style storytelling is really impressive,” notes Stett. “They have such a great reputation as a company and their feature division really adds an interesting element. I’m thrilled to join the roster!”

“I was blown away by the emotion and storytelling in Carrie's work. Her work is incredibly moving. On top of that she has infused hidden camera and surprise elements in her work and always captured the big moment perfectly,” said Jonathan Schwartz, WSF Head of Marketing and Sales.

After studying Communications at Emerson College, Louisiana-native Stett made her way out to Los Angeles and eventually landed at the Tennis Channel, where she wrote and produced the travel and interview series “Open Access.” She continued to write and produce a wide range of unscripted series work, organically shifting into directing while working at ABC Studios. She directed and produced the digital comedy series “General Hospital Now!,” the comedic companion series hosted by Nancy Lee Grahn, which generated renewed interest in the soap. Stett also brought her storytelling skills to Univision’s “Drop the Mic with Becky G,” which documented the Latina pop sensation’s early days as her career was taking off. The series was nominated for a 2014 Cablefax Award.