Alex Karpovsky and Teddy Blanks sign to the roster 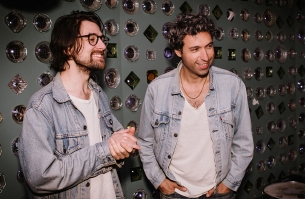 With a shared sense of humor and lively approach to production, Spielbergs’ collaboration draws upon Karpovsky’s background as an actor to evoke subtleties in performance and Blanks’ experience as a designer to curate a stylized visual aesthetic. Spielbergs’ work fuses absurd, surrealistic visuals with dynamic character driven storytelling, as demonstrated by their work on the forthcoming Amazon series, The New Yorker Presents.

Click Here to view a reel of their work.

“I’m a big fan of the work Alex and Teddy have done independently. I loved Alex’s film Red Flag, and Teddy created absolutely brilliant graphics on two films we produced: Listen Up Phillip and Queen of Earth,” notes Washington Square Films Founder/President Joshua Blum. “As a team they have great chemistry. They are both smart, witty and creative, and their shoots are lots of fun.” Adds Washington Square Films Director of Sales & Marketing/Managing Director Jonathan Schwartz, “I’m excited about their enthusiasm for advertising and branded content. Alex is a former editor and Teddy has created graphics for advertising, so they have experience with clients and agencies, and since they are both talented writers, they bring a wealth of ideas to the table.”

“We worked with Washington Square Films on several projects and have found them to be wonderful creative partners that allowed us to develop and refine our sensibility,” adds Spielbergs. “We are looking forward to working with Washington Square Films to collaborate with like-minded brands to develop ideas that are funny, original and narrative driven.”

In addition to being an accomplished singer and songwriter, Blanks is co-founder of the Brooklyn-based design studio CHIPS. He has designed and produced title sequences for over 50 films and television shows, including Still Alice, Love & Mercy and HBO’s “Togetherness,” as well as book covers for Kim Gordon and Lena Dunham. Karpovsky has directed five feature-length films and an episode of the HBO comedy series “GIRLS,” on which he plays the role of Ray Ploshansky. He has also acted in over 30 films, including the last two written and directed by the Coen Brothers—Oscar-nominated Inside Llewyn Davis and the upcoming Hail, Caesar!.