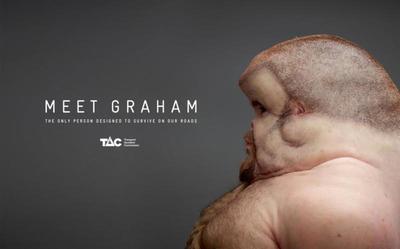 Clemenger BBDO, Melbourne has ranked #1 most effective agency in the world in WARC's results of the 2018 WARC 100, an annual global index of the world's top marketing campaigns and companies based on their business impact.

Clemenger BBDO's 'Meet Graham' campaign for Transport Accident Commission has ranked in at #4 in the world's top 10 effectiveness campaigns and its 'Hungerithm' work for Snickers has nabbed the #5 slot and Leo Burnett Melbourne's 'Reword' campaign for Headspace has ranked #9.

Australia has ranked #3 top country for effectiveness behind the USA and UK.

BBDO Worldwide has ranked as the #1 agency network for effectiveness.
WARC 100 tracks the performance of campaigns, brands and agencies in more than 70 of the most important global, regional and national marketing effectiveness and strategy competitions around the world. Now in its fifth year, the WARC 100 is based on a rigorous methodology developed in consultation with Douglas West, professor of marketing at Kings College London.

In second place is 'The Swedish Number' by INGO Stockholm for The Swedish Tourist Association, which manages hotels and hostels across Sweden. The purely PR-driven approach saw more than 32,000 Swedes sign up to take more than 200,000 calls from abroad helping STF boost its renewal figures and attract new members.

Ranked third is the 'Care Counts' campaign for Whirlpool by DigitasLBi Chicago. The appliances manufacturer installed washers and dryers in schools to give disadvantaged students access to laundry facilities, resulting in 90% of the participants increasing their school attendance rate. The programme has been expanded to nearly 60 schools across the US.

Three themes have emerged from the world's top effectiveness campaigns:

Starcom Chicago has returned to the top of the media agencies for effectiveness ranking with almost triple the points of the second-placed agency.

Eight of the top digital/specialist agencies for effectiveness are from the US, with Chicago-based agencies making up the top three. DigitasLBi Chicago takes poll position.

BBDO Worldwide remains the most awarded network for the fifth year in a row, having retained this rank since WARC 100 began in 2014. Its agencies contributed to four of the top 10 campaigns and 19 of the top 100.

For the second time Omnicom Group is the most awarded holding company, having previously held top position in 2014. Omnicom Group owns four of the top 10 agency networks.

Says John Wren, president and CEO, Omnicom Group: "Producing great work that drives results for our clients is why we come to work every day. It is especially gratifying to see Omnicom recognized by WARC as having five of the top ten individually ranked agencies, three of the top five networks, and being the top-ranked holding company. I could not be prouder of our teams."

Burger King improved its ranking by 30 places to reach the top brand for effectiveness, with the 'McWhopper Proposal' campaign in the top 10 and 'Backyard Burger King' in the top 100. The continuing performance of Ariel's 'Share the Load' campaign has contributed to the brand retaining its second place.

Unilever was the most effective advertiser for the third time, having previously held this top position in 2015 and 2014. Unilever has four campaigns in the top 100 - Lifebuoy's '#HelpAChildReach5', Knorr's 'Love At First Taste', 'The Vaseline Healing Project' and 'The radicalisation of Persil' - with a further 50 campaigns across all competitions contributing to its tally.

Says Keith Weed, chief marketing and communications officer, Unilever: "It's a great honour to be recognised by WARC as Most Effective Advertiser again. I'm hugely proud of our marketers, working hard to drive campaigns with purpose that cut through to consumers and make a real impact."

USA retains its place as the top country in the world with 36 of the top 100 campaigns, compared to 12 from the UK and 12 from Australia.

The most highly ranked campaigns and companies in WARC 100 are:

The WARC 100 is now part of Gunn Report, which recently published Gunn 100, a ranking of campaigns and companies based on creativity.
Commenting on WARC 100, Emma Wilkie, Managing Director, Gunn Report, says: "This year's WARC 100 once again confirms that creative approaches to marketing translates into marketplace success, with nearly all the top 10 campaigns also recognised in Gunn 100. Long-term strategies continue to be an important element to long-term success but we're also seeing a significant number of purpose-led and PR-led campaigns doing particularly well in achieving commercial objectives."

The full WARC 100 rankings - including the world's top 100 campaigns for effectiveness, top 50 creative, media and digital/specialist agencies for effectiveness, agency networks, brands, advertisers, countries and top holding companies as well as commentaries, the work and credits - is available by subscription on www.warc.com/gunnreport.

The Gunn media rankings will be released in March.
view more - Creative