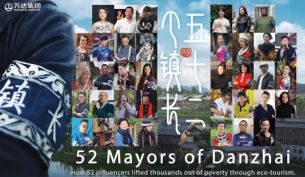 Just a few short years ago, the little known village of Danzhai, hidden away in the remote mountains of South China, was limping along as one of China’s 50 most impoverished areas. With the help of the Wanda Group, and spurred on by President Xi Jinping’s commitment to eliminating poverty in China by 2020, the village has left that bleak shadow behind and lifted itself out from the dark to embrace its breath-taking landscape and ancient traditions, becoming a jewel of global tourism. The campaign has gone on to attract worldwide attention, winning a Bronze Lion at the Cannes Lions International Festival of Creativity, an award known as the “Oscars of the marketing industry.”
Danzhai’s incredible transformation has been helped along by a guardian angel in the form of the Wanda Group, a world- renowned real estate company. In 2014, the company saw an opportunity to lift Danzhai and its people out of poverty and showcase the true beauty of the area. The Danzhai Wanda Village is located in Qiandongnan prefecture, Guizhou province.  Built with 2–billion yuan investment by Wanda Group, this Miao-style village steps on the way to rejuvenation with a vocational and technical college and special poverty alleviation fund. Features nearly 30 items of UNESCO cultural heritage including ethnic handicrafts, Miao cuisine and traditional medicine,  Danzhai Wanda Village is becoming an exemplary case of targeted poverty alleviation in China which booms the tourism through a good cause “Visiting Danzhai is a  help to alleviate poverty”. 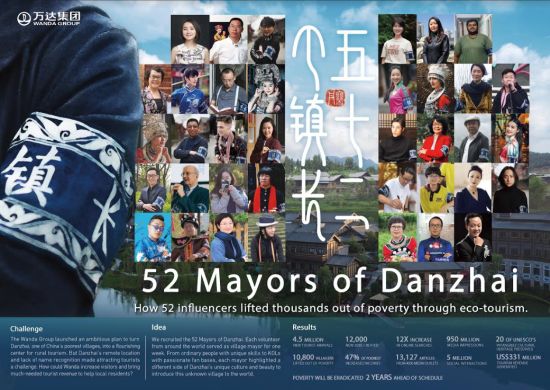 In order to attract more travellers, Ogilvy Beijing volunteered to joint this ambitious CSR project and find ways to make this unknown village a household name.   Instead of relying on donations, the goal was to build up tourism and enhance local businesses as a sustainable long-term solution. With the support of key creative strategy, the village invited 52 KOLs from all over the world, each with their own interests, followings and communities, to each serve as mayor to Danzhai for one week. Each mayor would use their distinct influence and expertise to raise the village’s profile in their own unique way. Week by week, a new facet of Danzhai was showcased to an ever-growing audience who were hungry to see what Danzhai could offer. With new life coursing through the village, it has become a shining example of President Xi Jinping’s goals to eradicate poverty and create a “moderately prosperous society”.
Since the arrival of the very first mayor in July 2017, Wanda group has used its expertise and resources to help spread chronicles of each mayor’s respective efforts to China’s far-reaching online community, spanning the young audiences of Toutiao to an older and wiser generation through People.cn. From food bloggers to folk musicians, each new mayor has contributed something unique to help lift the town out of poverty. Managing Partner，Autumn Guo, the idea contributor of the project, was nominated as the 3rd Mayor of Danzhai. Together with his team, he brought his communications expertise directly to bear in spreading Danzhai’s reputation.
Selina Teng, President of Ogilvy Beijing said, “As a sustainable CSR project, Danzhai’s success owes much to the power of ‘content communication’.  With its strengths in digital and social communication, Ogilvy has provided a unique position and voice for this small village. With our belief in ‘making brands matter’ at the core, insightful marketing strategy and good execution, backed by real devotion from our team and the support of the Wanda Group, had led to a real success story in Danzhai.”
These efforts have resulted in clear and tangible results. As of June 2018, more than 5 million tourists have come from far and wide to explore the previously unknown town, bringing in over USD $331 million in tourism income by the end of 2017. But far more important is the impact that this incredible boom has had on the local people. More than 10,800 people have been rescued from poverty by the end of 2017, representing over 1 in 3 of impoverished residents. Over 12,000 jobs have been created by the programme and Danzhai is set completely rid itself of poverty a full two years ahead of the county’s schedule.
Inspired by the Wanda Group and Ogilvy, Danzhai has completely transformed itself from a remote and unheard-of town into a rich and thriving hub of arts and culture. This little village with 52 mayors has climbed out the darkness and is on its way to become a household name.
view more - Awards and Events