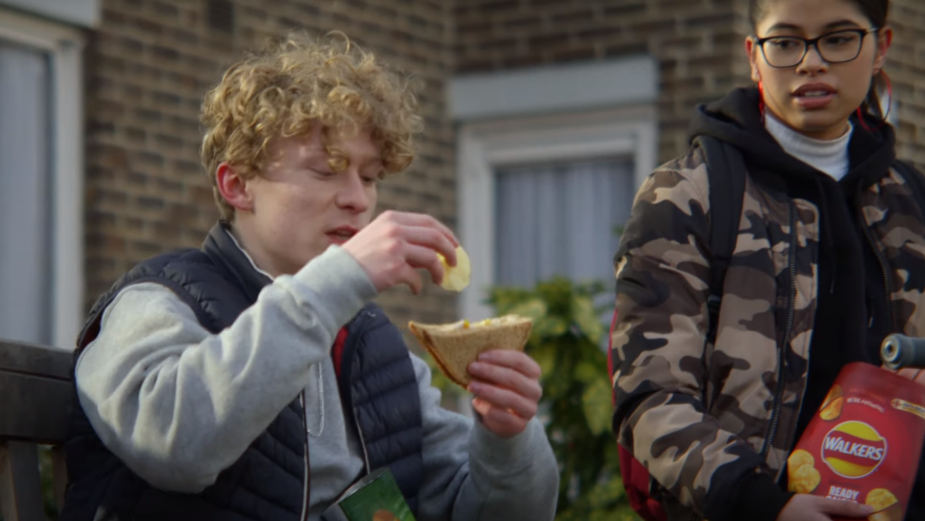 For years Walkers has sat on the sidelines and watched Brits debate about how to eat their lunchtime sandwich and packet of crisps. Launching today, the latest campaign from VCCP sees Walkers tap into the age-old debate with the launch of #crispIN OR #crispOUT.

In a world where food debates rage on, crisps and sandwiches bring an unexpected unity to the nation, whether the crisps are placed inside the sandwich, or on the side of the plate. In the latest integrated campaign from VCCP, Walkers will encourage consumers to voice their opinions on their lunchtime sandwich habits and aims to build brand love around the British crisp sandwich across multiple channels.

The campaign launches with a tongue-in-cheek 40-second film, directed by James Rouse from Outsider, and explores a range of different human reactions to the iconic crisp sandwich; from pride, excitement and delight to confusion and pure disgust. We see a couple out for lunch at a smart restaurant when the husband, much to the distaste of his wife, brazenly puts crisps in his sandwich and eats it unapologetically. Another scene depicts a sheepish looking businesswoman in the middle of a lunchtime company meeting, and her bosses’ horror when he sees crisps tumble out of her sandwich onto her plate.

Fernando Kahane, senior marketing director at Walkers, said: "We live in a great nation, full of differing opinions and beliefs and although we may not agree on everything, we can all agree on one thing – a sandwich without Walkers crisps is a sandwich not worth eating. Having conducted the biggest research into crisp sandwiches, this campaign has been inspired by our consumers and their habitual behaviours. Tapping into the lunchtime sandwich market, we wanted to finally join in with the quirky, and sometimes controversial, national debate around the crisp sandwich.”

“Lockdown has given us a greater appreciation for how crisps can brighten up yet another homemade sandwich. As the country slowly start to head back to the office, the key part of the day is lunch – so whether Brits continue to make their sandwiches from scratch, or buy out, we want to encourage them to voice their thoughts – are they #crispIN or #crispOUT?”

Mark Orbine, executive creative director at VCCP, added: “Do you stack your Smokey Bacon flavour in your cheese and salad bap? Stuff a few Prawn Cocktail into your Meatball Marinara Sub? Or do you prefer to sprinkle your Cheese & Onion to the side of your tuna pita pocket? When it comes to sandwiches, are you crispIN? Or crispOUT? This is a debate that's been raging for a while. So it was time for Walkers to finally get involved. To hero the stackers, the sprinklers, the crunches. Because we all might have our differences about how we eat our crisp sandwiches, but there's one thing we can agree on, they taste better with Walkers.”

As well as being inspired to create their own #crispIN or #crispOUT sandwiches at home, consumers will have the ability to experience the choice in Subway stores across England, Wales, Scotland and Northern Ireland. In a first of its kind collaboration between Walkers and the sandwich franchise Subway, from the 7th April until the 25th May, Subway guests will be asked ‘WhichWay’ they want their Sub when ordering in-store, and will able to choose to add Walkers Ready Salted Crisps as a topping on any Sub, wrap or salad from an extra 20p to create a #crispIN meal.

Also part of the Lunch campaign, Walkers have released a brand new flavour, Flamin’ Hot, across its core potato crisps range, for those who want to spice up their life (and sandwiches).

Walkers #CrispIN or #CrispOUT campaign will run from today until the 20th June. Activity will run across TV, video-on-demand with cut downs across online video and social, with Media planning and buying handled by OMD. A consumer PR campaign will launch on Thursday 22nd April by Splendid Communications, with a trade campaign run by Cirkle. In addition, Walkers will run an influencer-led social media series, featuring A-list celebrities including Olly Murs, Asim Chaudhry, Laura Whitmore, Roman and Martin Kemp and Gordon Ramsay led by influencer agency, Billion Dollar Boy.

This work follows the recent Brand equity campaign which marked a new positioning for Walkers, moving from product to purpose, and using humour to create positivity. It also introduced a tagline into their marketing for the first time– ‘when life gives you potatoes, make crisps” which is continued in this latest campaign.