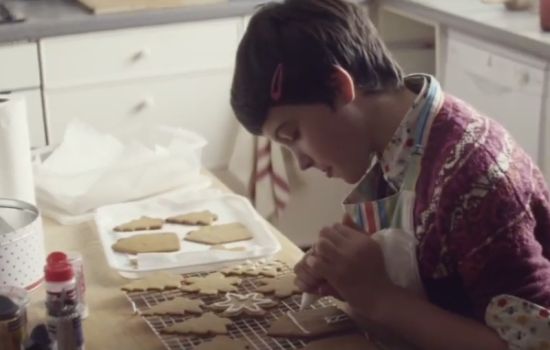 This week, Waitrose will air its long-awaited Christmas TV advert with a pioneering soundtrack sung by members of the public.

Rather than a high profile star, a Partner (employee) will play a lead role in the festive ad which will focus solely on the Waitrose brand for the first time in a number of years.

Following the successful Easter advertising campaign, the Christmas advert will have a subtle focus on  the unique culture and values Waitrose has as a co-owned business. Launching in the evening of Sunday 9th November 2014, the advert will aim to convey how the supermarket is owned by its Partners and how this has a direct impact on the service and care that customers receive.

The story in the ad will focus on a little girl trying to make gingerbread biscuits for her school fayre, and after disastrous attempts, she goes to Waitrose for advice.   After successfully making the biscuits, she sells them all but saves one back for the Waitrose Partner.  The campaign line running through all of the advertising is "When you own something, you care a little more. Everyone who works at Waitrose owns Waitrose, so they care a little more. ”

In October, the supermarket  launched its ‘Donate Your Voice’ campaign urging singers across the UK to sing the soundtrack for the  advert, and in doing so, help to fundraise for three charities by creating a charity single.

In an advertising first, renowned music producer, David Kosten,  has mixed the recordings from the public to create a virtual choir. The choral version of the song, made up of the public’s voices, is the official soundtrack for the advert, but is also available to download as a single from 9 November - with 100% of the profits going to charity.

The song for the soundtrack is Dolly Parton’s hit ‘Try’ taken from her latest album. The song’s lyrics are about overcoming adversity and about perseverance which ties into the narrative of the ad.

Rupert Thomas, Waitrose Marketing Director, said:"Because our Partners own the business, they are motivated to go that little bit further for customers - and that’s what we want to portray in this advert. The extra dimension of the soundtrack means customers can also give something back. When they donated their voice, they also had a chance to support three worthy charities who will be receiving the profits from the song when it goes on sale as the ad airs.”

When members of the public donated their voice online, they were asked to put a virtual green token in a box to support one of the three charities involved, Age UK, Great Ormond Street Hospital Children’s Charity and The Trussell Trust.  It worked in the same way the ‘Community Matters’ scheme works in Waitrose stores, with the votes of those donating their voices determining how much goes to each charity

Featuring in the ad is ten year old Blaise Allan from Kent. Blaise also bakes in her own time and has performed in many local theatre shows. This will be her first televised commercial.

The Waitrose Partner in the advert is 25 year old Adejumoke Sanusi, who lives in Ilford, and works at the Canary Wharf Waitrose. Known to her colleagues at Waitrose as  'Jummy', Adejumoke has worked for Waitrose for a year.

The campaign was created by BBH London and directed by Tom Tagholm.