Vrse.works Renames to Here Be Dragons 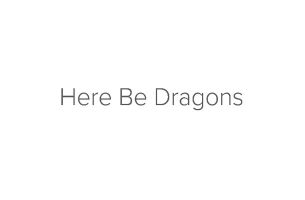 Here Be Dragons co-founder Chris Milk says, "We are very excited to announce we are changing the name of our creative agency / production company Vrse.works to Here Be Dragons. On old maps, uncharted territory would be marked by the term Here Be Dragons. And for the first time in nearly a century, we now face a similar uncharted territory at the birth of a new medium; a completely unexplored frontier for storytelling, communication and human connection.  I'm very proud of the team of creative, production and technical artists that have joined Here Be Dragons over the past two years.  We've produced some incredible work with agencies, brands, and beyond.  Our roster of creators have each uniquely defined their careers by mixing mediums and innovating the connection between their work and the audience. Together, they are discovering, writing and crafting the language fundamental to VR storytelling.”

Here Be Dragons co-founder & CEO Patrick Milling-Smith says, “We are delighted to welcome, on the back of such an exciting week with the reception and accolades for The Displaced, Waves of Grace and the Conservation International experience Valen’s Reef, new members to the Here Be Dragons executive team including Edu Pou (Barbarian Group, Wieden & Kennedy, CP+B), who joins as our new Executive Creative Director, Justin Denton who joins as Technical Creative Director and Fredrik Frizell (Mediamonks, Stopp), who joins as new COO.  And we are thrilled to finally have found a name that feels truly representative of the spirit of the company”.

Edu Pou says, “It's not everyday that somebody asks you to join a journey to uncharted territories, to define an exciting new medium with your work. That's precisely what Patrick and Chris have invited me to do. And just in case my pioneering spirit needed extra convincing, they've been showing me and everybody else the way virtual reality goes beyond the hype with unforgettable stories that aren't told but experienced instead, like the award-winning 'The Displaced'. It'll be an honor and an exciting challenge to be part of this beautiful adventure.”

The new Here Be Dragons executive team is joining a deep bench of technical, creative and production executives who have cumulatively won numerous Tonys, Webbys, Clios, a Grammy, and Cannes Lions.  Here Be Dragons recent VR collaboration with NY Times for The Displaced won the AICP Awards Best in Show and this weeks Grand Prix at 2016 Cannes Lions festival.

Here Be Dragons recently released experiences for Conservation International with Valen’s Reef, The Click Effect with The New York Times, and is in production on an unnamed project set in Africa with Academy-Award winning director Kathryn Bigelow.