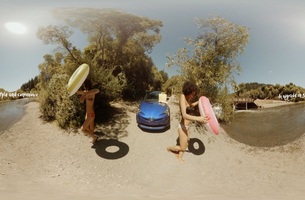 Los Angeles-based creative studio VR Playhouse director DJ Turner takes a trip up the Northern California coast to fuel summer expeditions in the redesigned Toyota Prius in anew 360 video, “Prius. Redesigned. CA, Style.” The spot is viewable in 360 as well as in virtual reality on Google Cardboard headsets. The immersive video features a group of friends loading up their Priuses to embark on classic summer adventures, from taking selfies in the city to driving along the GoldenGate Bridge, camping in the woods, swimming in the river, exploring the countryside and even picnicking in wine country.

Turner, a NorthernCalifornia native himself, was inspired by the natural beauty of the state. “We wanted to show the idea of people traveling, going on adventures, and spending time with friends, incorporating not only iconic locations like San Francisco and the Central Valley, but also parts of NorCal life that you don’t often see,like tubing in the river,” he notes. “Northern California has so much to experience, and the Prius is a great way to do it all. I hope the 360 video encourages people to get out and explore, wherever they may be.”