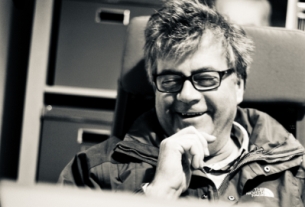 Ivor Taylor has been immersed in the sound industry for the past 40 years. In 1994, Ivor founded Grand Central Recording Studios (GCRS) with business partner Carole Humphrey and leading sound designer Raja Sehgal. He is actively involved in the day-to-running of the business as Finance and Technical Director and Co-Owner.

We chat with Ivor about the world of VR, and how it will surpass all expectations.

Q> Is the technology as good as the hype suggests?

It will be. But, right now, all of the headsets I have tried are still very much a work in progress. In the next five years, I think the world of VR will surpass all expectations.

Q> Is the experience a ‘one hit wonder’?

The current experience, yes. Maybe. A good example of this occurred when I took my Samsung Oculus VR headset on holiday with me recently. While sitting in the small, modest hotel bar, I was able to take my group of friends instantly on a surfing trip to Tahiti through the power of VR. They all went wild – young and old. However, only one person asked for a second go the next day. So, I think unless you have a vested interest in the technology there is definitely a grey area around repeat usage.

The Oculus was not great when I tried last year’s version. The graphics were poor and really distracted from the overall experience. When it comes to the Samsung Oculus VR, I would say the graphics are average – just about acceptable with a 6S+ iPhone. So far the Vive is by far the best VR headset out there, in my humble opinion. It has fantastic graphics, approaching real life quality. A stand out experience for me using Vive was boarding a spaceship, only to find a hidden trapdoor open right beside my feet – extremely disconcerting.

Sound for VR is currently way behind the curve. To be frank, a lot of it sucks in quality, creativity and execution. As an audio professional, I think that sound has as critical a role in creating the VR suspension of reality as it does in film. As George Lucas famously said, sound is half the picture. Maybe in VR it will be more than half, as sound gives you all around cover while vision is only what is in front of you.

Perversely, for fast-moving action style VR audio matters but it is not critical. The visual experience of a monster shooting at you takes precedence over the subtlety of the sound whilst your brain is computing what the hell to do next. However, when the VR experience is a view of a panoramic landscape then the audio choice, quality and coherence to the visuals will have a huge impact on the user experience.

In the midst of all of this alternate reality, never forget that your brain does not know what is going on out there; it's just making the best guess it can and sound is an enormous part of getting that reasonably right.

Q> Is it worth the price tag?

When it comes to the Samsung VR there is no denying it is a lot of fun. However, taking into account the major issues around graphic quality, it is definitely not a long-term investment.

Both Oculus and Vive cost a lot of money. If you are a tech lover, gamer or similar and can afford it then as an early adopter you will probably feel it was worth the investment. However, my advice is to hold off and wait for the next generation of technology; I predict that the experience will grow from amazing to unbelievable.

Q> Is it a smart move detaching ourselves completely from actual reality?

It is terrifying. I used an early Sony 3D headset years ago and was always frightened someone would come into the room and either scare me to death as a joke, or literally scare me to death. Either way, it unleashed a paranoia about my own fatality – and that was with a first generation headset! On a more serious note, I guess it all depends if you like the reality of real life.

Q> What impact, if any, do you feel VR will have on children?

Getting picked on in the playground and bullied at school was something I had to go through to make me who I am today, and I am happy with who I am. However, If I could have escaped to a happy VR world, I most definitely would have done so at the time. If I had, I would not be the person I am now, and I guess that handling the trials and tribulations of the real world would be much harder.

I believe that all new technologies offer the paths of good or evil. Do not be fooled into thinking that it’s only a headset.