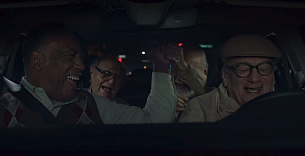 To introduce the All-New 2019 Jetta, Volkswagen Canada has launched a surprising, new campaign to highlight the refined features of the completely redesigned sedan, while also capturing how much fun it is to drive.

“The All-New Jetta has the quality, style and refined features of a luxury vehicle, which motivates drivers’ to get behind the wheel,” says Lynne Piette, director of marketing, Volkswagen Group Canada. “Our new campaign humorously demonstrates how the All-New Jetta inspires a drivers’ love of driving.”

The campaign’s centrepiece film shares the adventure of a mature man sneaking out of his house to pick-up his friends for a late-night joyride in the All-New Jetta.

Developed by DDB Canada, versions of the campaign film appear on television, online and in cinemas across the country.  Six-second social vignettes from the film are being shared on Facebook, as well as 15-second digital videos that highlight some of the new features available in the All-New Jetta.

For the film’s soundtrack, a content partnership with Universal Music Group was created, which features a remix of Party All The Time by Canadian indie band The Elwins.

The partnership also includes behind-the-scene footage of the track’s recording and other content being shared on the band’s social channels.

While prelaunch activities commenced last fall, the niche advertising campaign targeting loyalty customers and conquest audiences kicked-off on April 2, 2018 to generate excitement and lead generation for the All-New Jetta,  which will be available at the beginning of May.

To learn more about the 2019 All-New Jetta and to sign up for updates, visit: https://vwmodels.ca/2019/jetta_cta