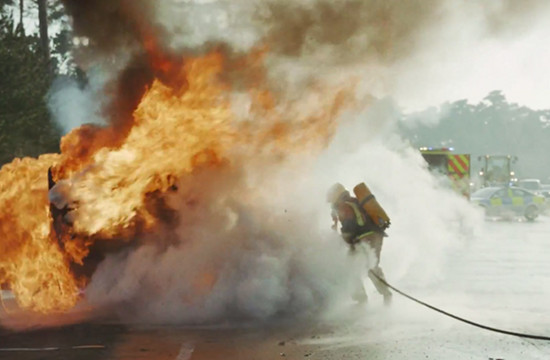 Grey London has unveiled its first work since being appointed to the Vodafone UK roster. The campaign highlights the dependability of Vodafone’s network and centres around its support of the emergency services in the UK. It marks the first new campaign commissioned by Daryl Fielding since her appointment as Vodafone’s Director of Brand Marketing last year.

The campaign broke on TV last night, as well as in cinemas and video on demand. It will be followed by a national print campaign and online video content.

The film opens in the midst of a full-blown emergency – a car is ablaze on a motorway, a fire engine is in attendance, fire crews fight the blaze. Heroic, brave, real; they get on with the job. Over the chaos, a soft but matter-of-fact voice kicks in: the voice of a fireman’s wife on the internal struggle she wages, every time her man leaves the house. “People say ‘but don’t you worry?’”, she tells the viewer. “And I go, ‘well no, it’s just what they do’. It’s what they are trained to do. They are used to it. And so are you.”

“But even after 27 years, you still want a call, or a text. But when he does, it’s never ‘I love you’, ‘I’m okay’, ‘I’m safe’. It’s just ‘what’s for dinner?’ Daft beggar”. The blaze is out, and as the fireman takes off his helmet, it’s revealed that Vodafone’s network supports 77% of the emergency services. The film ends with the line ‘Power to our emergency services. Power to you.’

The film – which features real, off-duty firemen – was created by Vicki Maguire & Jonathan Marlow and directed by Marcus Söderlund through Academy.

Daryl Fielding, brand director, Vodafone UK, says: “This is a new approach for Vodafone UK, disrupting the trivialisation of the category. It’s a simple message and one which everyone can identify with – the importance of connectivity and the dependability of Vodafone’s network.”

Vicki Maguire, deputy ECD, Grey London, says: “To the emergency services and their families, a strong communications network is as vital a piece of kit as any hose or fire truck. It was a privilege to be able to shoot with real firefighters. Seriously – they have proper jobs.”

Music: Fragments of Self by Tom Hodge & Max Cooper