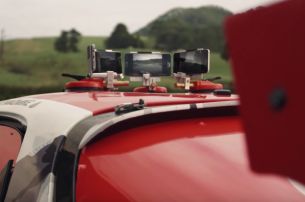 Vodafone has pulled off one of its most innovative marketing activations yet with a high octane stunt featuring kiwi drift car sensation, Mad Mike Whiddett, and the company’s own Director of 4G Network, Tony Baird.

Mad Mike successfully completed the drift course with his windows completely blacked out, his only vision coming through four tablets fixed to the inside of his windscreen.

A live video call across the Vodafone 4G network delivered Mad Mike’s only view of the outside world, beaming in from four smart phones attached to the roof of his drift car.

Mad Mike said the #4GRedline stunt was the most extreme and challenging of his career, “It was a little risky that’s for sure and this was without a doubt the biggest challenge I’ve ever had behind the wheel.”

“The whole experience was amazing and like being in a different world because switching quickly between those screens actually made me feel a little bit car sick for the first time in my life,” he said.

Vodafone Head of Brand and Insights Lou Kuegler said the 4G Redline experiment set out to demonstrate the reliability of the Vodafone 4G network in an innovative, dramatic and authentic way.

“This is what modern marketing is all about – it’s one thing to say we have a reliable network, it’s another to demonstrate it, and that’s what we set out to do,” said Lou.

The 4G Redline idea has been under discussion with the company’s creative agency, FCB, since December 2014 and was given the green light early this year to demonstrate the power of the Vodafone network.

“The 4G Redline idea is a dream fit for Vodafone’s innovation strategy,” said Lou. “The actual shoot was a high stakes game because unless Mad Mike actually nailed this stunt, we didn’t have a story.

“A blown tyre, a broken clutch and broken axel certainly raised the stakes - but it worked - and the 4G network delivered the vision Mad Mike needed to manoeuvre the car around the course with confidence,” said Lou.

FCB Asia Pacific Executive Creative Director James Mok said the agency wanted to show the reliability of Vodafone’s 4G network in an interesting way as a mobile network is not easily tangible for the public.

“This was an incredible collaborative effort by the Vodafone marketing, network and device teams, Curious Films, Mad Mike and his team, and FCB,” said James.