The TV spot was created by DDB New Zealand 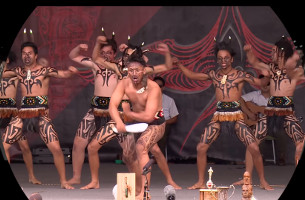 Vodafone has today unveiled Vodafone TV - a world of entertainment that lets Kiwis experience television like never before, by giving them freedom and control over their favourite content. The launch is being accompanied by a TVC created by DDB New Zealand.

It brings SKY TV, free-to-air and a range of popular online and app-based entertainment services such as Netflix together in one intuitive, easy to use system.

In a world where mobility is everything, Vodafone TV gives viewers the option to switch seamlessly between their smartphone, tablet and television. With some of the content - viewers have the ability to stop what they're watching on TV, pick it up on their smart phone, and continue watching after they've left the house.

The launch of Vodafone TV comes hot on the heels of a significant evolution of Vodafone's brand positioning strategy, strapline and visual identity worldwide. The new strategy is designed to underline Vodafone's belief that new technologies and digital services will play a positive role in our future.

Says Matt Williams, consumer director, Vodafone: "Advances in technology create endless possibilities and make the future exciting. Vodafone TV is a new generation of TV service that will enable Kiwis to experience TV like never before. It is something that delivers on our new brand promise: The future is exciting. Ready?  We encourage everyone to visit a Vodafone shop and try Vodafone TV for themselves."

In a New Zealand first, Vodafone TV delivers cloud-based 4K television to Kiwis over fibre and Vodafone's FibreX network. It features catch-up functionality that is delivered direct from the cloud so customers can watch lots of the shows they've missed over the last three days, even if they've forgotten to set up a recording.

Says Williams: "When you sit down in front of the television you want to be able to relax but these days that often involves messing around with different remotes and apps - television shouldn't be that complicated. Vodafone TV simplifies everything by pulling all your favourite content together in one place, giving you the freedom and control to enjoy television the way it should be."

Customers who sign up to a Vodafone TV package - which will bundle together unlimited broadband and SKY Basic - will have the option to add on premium content choices like SKY Sport, SoHo and SKY Movies, and they won't require a satellite dish.

In addition to unlimited broadband and SKY Basic, the Vodafone TV packages will include all free-to-air channels such as TVNZ 1 and TVNZ 2, THREE, Bravo, Maori Television and Television 33 - premium subscription applications like Netflix*, as well as easy access to TVNZ OnDemand, ThreeNow, YouTube, iHeartRadio and Love Nature 4K. Full plan and pricing details will be announced soon.

Over time Vodafone expects to expand content channels and evolving functionality will make the experience even more diverse and user-friendly for customers.