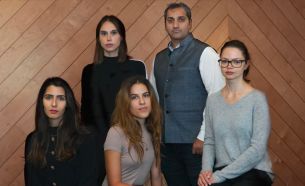 VML London, the creative and innovation agency is further building up its now 25 strong creative department under the leadership of ECD Harsh Kapadia, who joined at the beginning of the year from VML New York.

They bring a wealth of expertise in innovation and through the line creativity at both a local and global brand level.

They join the agency at an exciting time. They will work on VML’s recent account wins Baileys (Global Digital AOR) and Nestlé Skin Health (Global AOR) as well as existing clients including Colgate-Palmolive and the International Olympic Committee. They will also take an active role in the new business drive across the region.

VML London expanded its headcount by 62% YOY. The agency is actively looking for five more creatives. The creative department is 25 strong, 64% female and 27% BAME. It includes 10 different nationalities. Globally, VML ranks as one of the Top 10 agencies according to Cannes Lions.

Kapadia, ECD, said: “Eve, Andreea, Paula and Athina are part of a new breed of international and hyper-connected creatives. I’ve been looking at many books and theirs were simply the best ones. I am excited to have them on board.”

Paula Hochberg is a Spanish-Argentinian senior copywriter. She most recently worked at Senora Rushmore in Madrid – ranked most creative Spanish agency over the last twelve years. In 2018 she won a Film Lion at Cannes for the Red Cross’s "Decisions". Watch it here.

Eva Kemanes has worked in Amsterdam, London, Prague and Hamburg for top creative agencies including Ogilvy, VCCP, and Digitas. Her work for the UN Refugee Agency won 5 Cannes Lions in 2016. Watch it here.

Andreea Nedelcu trained at Miami Ad School Europe and worked for Leo Burnett, JWT and Jung von Matt on a wide spectrum of clients. Her latest work The Gender Salary Experiment won many accolades including a New York Festivals Gold and a Clio Silver. Watch it here.

Athina Collaro is a senior graphic designer and concept artist with 8 years of experience in retail and luxury, she worked at Jo Malone, Avon, Hunter Boot and GlossyBox among other.