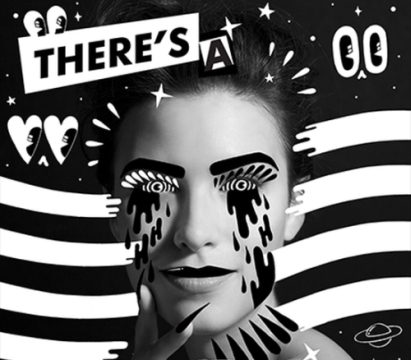 After a stellar launch party at Saatchi & Saatchi London on Thursday 27th November, the VivaWomen! Exhibition ‘There’s a Good Girl’ moves to the Assembly Rooms in Soho where it will be on view to the public from 1st to 19th December. Performance artist Pandemonia, singers Joanna Yearwood of Duran Duran and Sonique, Nancy Dell’Olio and Saatchi & Saatchi Chairman and CEO SSF Group EMEA Robert Senior attended the event at the iconic Charlotte Street agency, with many of the exhibiting artists including Alison Jackson, Pam Glew, Alison Pope, Mary Nighy, and new Selfridges filmmaker in residence Kathryn Ferguson coming along to see their work in situ, and Vogue photographer Elin Hornfeldt documenting the event with her camera.

Guests enjoyed delicious St. Germain and Beluga cocktails, Peroni and there was a scrum for the goodie bags containing such treats as Candy Kittens, Ren skincare, Frost French knickers aptly named ‘Floozie’, Picador books, hot sauce from The Pickled Village, Lazy Oaf products and scented candles from Architect at Home, and enjoyed ProperCorn popcorn in a pop up screening room.

Alice Jones of The Independent commented: “For decades, the way women appeared in advertisements was dictated by men. But now female photographers and creative are changing the rules”.

The seed for the concept of the exhibition came after Saatchi & Saatchi Creative Director Jo Wallace attended an event organized by VivaWomen! A Publicis Groupe initiative that works to raise the profile of women in advertising. They invited Wallace to stage an event at Saatchi & Saatchi, and she plumped for an exhibition celebrating women’s creativity. Sara Baumann, Talent Strategy Director of Leo Burnett Group and Chair of VivaWomen! UK explains: “We are a creative business, working to engage women for the majority of our clients, yet women are under-represented in creative departments in our agencies, which simply doesn’t make sense. The artists involved in this show have demonstrated incredible determination to push the boundaries both professionally and personally, and we are delighted to champion such audacious women making their mark on contemporary culture.” 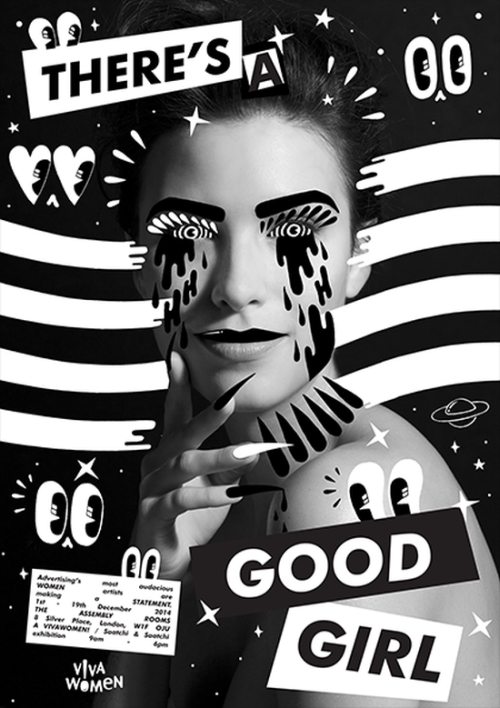 Wallace drafted in some of her colleagues at Saatchi & Saatchi to make the dream of showcasing some of the best women creatives a reality including Shelley Dobson and Lisa Robbins. Also in the TAGG team are Senior Art Director Suzie Quill and Project Manager Layla Boyd, who invited several female creatives, illustrators and filmmakers known primarily for their commercial work, to exhibit their more personal work. Quill worked closely with her creative partner Camilla McLean on the exhibition, and they created a beautiful exhibition catalogue, and commissioned master doodle-bomber Hattie Stewart to create one of her subversive images for the poster and catalogue cover. Stewart also created a limited edition ‘There’s a Good Girl’ print for the exhibition, a unique digital and pen artwork ‘Babe, No’, and TAGG knickers!

Director of Global Creative PR Lee Sharrock co-curated the exhibition, and invited Toni Gallagher, Pam Glew, Soozy Lipsey, Alison Jackson, Natasha Law and Nancy Fouts to take part. Several of these women started out as creatives in the advertising industry and later carved out successful careers as artists, exhibiting in galleries all over the world. For example Alison Jackson who created a memorable campaign for Schweppes with a Camilla Parker Bowles lookalike sipping a G&T, and went on to exhibit extensively in galleries and create a signature style of voyeuristic photography of celebrity lookalikes, exploring the contemporary obsession with fame and the cult of celebrity, and in ‘There’s a Good Girl’ her paparazzi-style photo of a Kim Kardashian lookalike being squeezed into a pair of Spanx by Kanye captures the zeitgeist and perfectly sums up how women are constantly trying to attain what is perceived as physical perfection. Nancy Fouts, who was one of the original high-powered women creatives, known for her seminal Silk Cut ad in the 90s featuring an iron and a length of silk, has transformed the iron from that campaign into a sculpture with a delicate Turin-shroud like figure of the Madonna on its underside. Sharrock discovered Soozy Lipsey’s work at the Other Art Fair, and Lipsey’s flying retro feather-covered hoover ‘Hovering Between the Two’ (2014) is a fabulously ironic twist on the exhibition’s title.

Toni Gallagher began her career as an art director, before making a move into fine art. For the TAGG launch at Saatchi & Saatchi she created two beautiful lightboxes of an x-rayed ostrich, and at The Assembly Rooms her ostrich x-ray etchings will be on display. Pam Glew is exhibiting in TAGG an American flag screen printed with an image of Vogue editor Anna Wintour - Glew has created her signature flag portraits for commercial clients including Ralph Lauren, and her image ‘Afghan Girl’ was featured on the cover of Le Monde. Natasha Law, who has made some beautiful illustrative commissions for clients including Mulberry, is exhibiting an Ink and Gloss painting from her new series ‘Stretch (I)’ (2014), a more abstracted version of her familiar languid female torsos.

Alison Carmichael created a clever typographic twist on the exhibition’s title, covering a giant billboard in Saatchi & Saatchi’s car park featuring the words ‘Good Girl’ spelled out with hundreds and thousands. Three films are included in the exhibition, all examining issues concerning women and young girls in today’s society; Veronique Rolland, whose work is featured in the collection of the National Portrait Gallery and is known for her seminal Dove campaign showing real women, is showing her film ‘Tree in Fog’ (2009), created during a trip to her native Scandinavia where she experienced  a personal epiphany; Mary Nighy, who recently made a powerful short film for the Thomson Reuters foundation about child slavery, is exhibiting her 2011 film ‘Small Town Glory; and Kathryn Ferguson, well known for her fashion and short films, is screening ‘Rear Guard’ (2013) which examines the hyper-sexualisation of women in music videos.

Rhea Thierstein, known for her collaborations with photographer Tim Walker, created a fragile sculpture of a Queen Bee ‘Bittersweet’ (2014), a gentle twist on the notion of struggle and isolation experienced by women today, and the vulnerability of motherhood. Sara Pope, who was fabulously invited to the Vatican to present her portrait of the Holy Father to him personally, created a striking neon image of a pair of pouting red lips, a comment on the symbolism of red lipstick.

Arvida Bystrom, whose photography was commissioned by VICE at the tender age of 16, created a new installation ‘Not in Her’ (2014) for TAGG, featuring digital work and imitation skin, and examining notions of contemporary feminism. Cassandra Yap, an art director whose work explores the juxtaposition of darkness and beauty, exhibits

‘Diamonds are Forever’ (2014), a limited edition screen print created from vintage pin ups and erotica. Photographer Jillian Lochner’s photographs ‘Study in Pink 1’ and ‘Study in Pink 2’ examine similar themes to Bystrom, depicting what appears to be skin being manipulated by surgey. Jessica May Underwood, a Central Saint Martins graduate whose career began drawing in house at Alexander McQueen, is showing her delicate drawing ‘Olivia’. French artist Malika Favre has a distinctive Pop aesthetic, as seen in her illustrations commissioned by Aldo, and the personal piece ‘Office Supplies’ that she is exhibiting in TAGG. Michela Picchi, an Italian creative based in Berlin, has created exquisite, colourful collaged illustrations for clients including Nike, and in TAGG we see her print ‘Divination’ (2014).

A percentage of any artwork and exhibition merchandise sold will be donated to charity Plan UK, who work with the world’s poorest children so they can move themselves from a life of poverty to a future with opportunity. They help girls around the world who are threatened by poverty, gender inequality, violence, poor education, conflict and disasters.

The exhibition will be on display at The Assembly Rooms, 8 Silver Place, London, W1F 0JU from Monday 1st December until 19th December. Opening hours Monday-Friday 9am-6pm with free admission