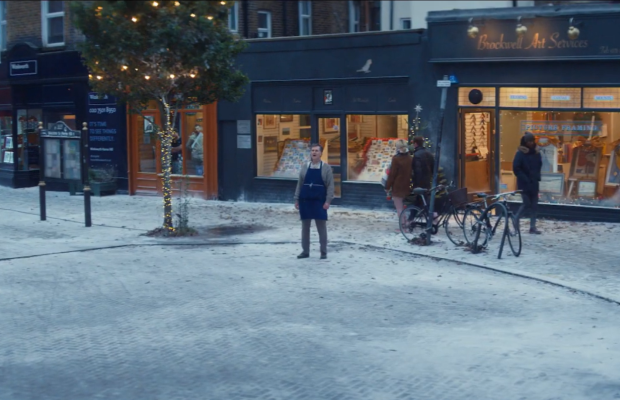 Visa has launched its 2019 Christmas campaign featuring real independent shopkeepers to inspire the nation to visit their high streets and shop locally this Christmas.

Visa’s Christmas campaign is a rallying cry to the UK’s shoppers, switching the focus from what they are buying to where they are buying, and encouraging everyone to support their high streets and local communities this Christmas and beyond.

Created by Saatchi & Saatchi, the advert features 13 real shopkeepers – including a bookseller, greengrocer, antique dealer and café owner - encouraging shoppers to show their local high street some love this Christmas. It will be aired for the first time at 9:15pm tonight.

Building on the success of last year’s creative, which saw high street businesses organically create their own festive copycat adverts, this year the campaign has evolved while staying true to its positive and impactful message.

Independent retailers up and down the country are invited to join the campaign by recreating the Christmas advert and showing why Where You Shop Matters to their own high streets. The copycat adverts will be independently judged with the overall winning advert airing in a prime-time television advertising slot in the run-up to Christmas for millions to see. By giving a high street a national advertising slot Visa wants to inspire people up and down the country to visit their own high streets and shop locally this Christmas and beyond.

As part of its #WhereYouShopMatters campaign, Visa is also supporting over 150 independent retailers nationwide, through the gifting of personalised adverts on billboards in six prime city-centre locations, including: Brighton, Bristol, Cardiff, Glasgow, and London, and geo-targeted ads on social media. With recent Visa research finding that 55% of independent businesses said social media helped them grow*, the channel focus allows the campaign to be more targeted - ultimately helping to drive footfall and engagement with the high street.

Suzy Brown, Head of Marketing, UK & Ireland, Visa commented: “To support independent retailers and their high streets, we are investing across more channels than ever before. This is the biggest Christmas campaign Visa has launched in the UK to date. To do this, we aim to build on the success of last year by giving even more small businesses a voice. Last year’s campaign drove an increase in brand differentiation and affinity and social sentiment increased positively; success we look to drive for the consecutive year.”

“We’re also really excited to invite independent retailers to come together and recreate our advert, showcasing the best of Britain’s high streets and why Where You Shop Matters to them. Through our campaign, we want to inspire everyone to shop locally this Christmas. Together we can all play a part in setting up our high streets and communities for success in 2020 and beyond”.

Kate Stanners, Global Chief Creative Officer, Saatchi & Saatchi added: “This Christmas we continue Visa’s campaign for local high streets, by supporting local shop keepers with a mix of activity, centred around a film which shows the merchants singing Queen’s track asking for ‘Somebody to Love’. All the merchants are real, and are a wonderful representation of the shops and characters that make our high streets so unique and important to our communities. We wanted to make this a heartfelt plea delivered with a huge helping of Christmas spirited fun.”

Dodie Finamore works in family business Finamore, an antique shop with furniture restoration run by her Father. It's long-known in Walthamstow as a local treasure-trove for unique and vintage finds.

Dodie commented on her involvement in the campaign: “I’ve been involved in the family business since I was a baby, having been born above the shop. Everyone on the high street has watched me grow up, but I’ve also seen how it’s evolved over the years too. It’s true that Christmas is such an important time for us small independent businesses, and I’m thrilled to be working with Visa on a campaign that has such a supportive message behind it.”

“We’re a close-knit community of shopkeepers in Walthamstow, and do our best to support each other to succeed. I just hope they don’t get too much of a shock when they see me singing on the TV!”

Directed by Gary Freedman the festive and heart-warming advert invites the nation to support their high street and independent retailers this Christmas. The full above the line campaign spans TV with 60” and 30” edits that will air during prime-time TV slots, as well as on cinema and online. The campaign will also encompass outdoor and social media.