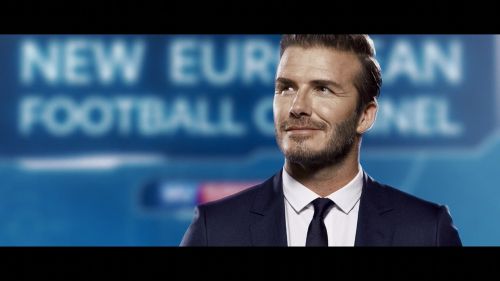 David Beckham is famous for his work both on and off the pitch – but his latest mission may just be the most ‘inventive’, as he tests top-secret Sky Sports innovations in a new James Bond-style ad created by Brothers and Sisters and premiering this week. Launching in the first ad break of the 2014 World Cup (9.45pm, 12 June), the global sporting icon is seen striding the corridors of a secret Sky laboratory,  vetting the next big break-through innovations in sport alongside Sky Sports’ chief boffin.

Amongst the quirky technologies David tests but ultimately goes on to reject are remote-controlled drone-cameras swarming over a cricket pitch. Others include a sensation suit which lets viewers experience the same physical impacts as a professional rugby player, and ‘Sofa Ref’ – X-Factor style voting for refereeing decisions – but everything proposed has a fatal flaw which ultimately results in a thumbs-down from Beckham. Finally David unveils the smartest idea yet - Sky Sports 5.  Launching in August, the brand new channel will be the home of European Qualifiers for UEFA EURO 2016, UEFA Champions League, La Liga, Copa del Rey and Eredivisie for Sky Sports viewers, plus a host of other European football programming including Revista De La Liga and Champions League Weekly.  He goes onto reveal that Sky TV customers with Sky Sports will be able to get the new channel as part of their Sky Sports package – and in a further bonus, can also get two years’ free Sky Broadband Unlimited worth £7.50 a month and get the great value of Sky’s totally unlimited broadband with no usage limits and no extra download charges.  This, Sky’s best ever broadband offer, means Sky Sports customers could save up to £330 over two years.

Andy Fowler, ECD and Founder of Brothers and Sisters, said: 'The sporting summer is a busy time. Punching through the noise isn't easy. That's why we've taken an unexpected approach to this campaign, and made a TV ad that will get you and your mates talking at half time of the big games. Startlingly good news. Brought to you by the world's most famous man. With a sense of humour. What's not to like?'

Barney Francis, Managing Director, Sky Sports, added: “Sky Sports 5 takes our unrivalled live football coverage to the next level offering more European football than ever before.  There’s never been a better time to be a Sky Sports customer and with two years’ free totally unlimited broadband, we offer the ultimate package for sports fans.”

The ad was created by Brothers and Sisters, produced by Rattling Stick and directed by Ivan Bird. The campaign will run across TV, cinema, print, radio, OOH, digital and social. The TVC has three edits, ones 60 second and two 40.  Media agency is Mediacom.

The launch of Sky Sports 5 arrives ahead of an unrivalled summer of sport on Sky Sports, with highlights including England Test cricket, Majors golf, England rugby union, Formula 1®, US Open tennis and rugby league’s Super League. Next season, Sky will offer more live football than ever before as it adds live European Qualifiers for UEFA EURO 2016 from September. Sky Sports has also secured 17 major rights announcements in 2014 alone, including deals for Masters and PGA Tour golf, IPL and England overseas cricket, British & Irish Lions, European Champions Cup and Top 14 rugby union, Scottish FA, Super League, WWE and GAA. 2013/14 was Sky Sports’ biggest ever season of Premier League football, which attracted record viewing figures. Average audiences for live matches up by 7% on the previous season, with 49 out of the 50 most watched live Premier League matches broadcast on Sky.

Sky Sports 5 will launch on 12th August.  Sky customers with Sky Sports will be able to register for the new channel and claim the free broadband offer from 12th June. More info here.