Trends and Insight 519 1 Add to collection 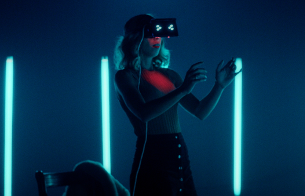 Virtual reality is everywhere right now and more and more production companies and creatives are exploring VR as an avenue for creativity. But outside of virtual reality content, there’s also a parallel tranche of filmmakers and writers looking at this technology from an outside perspective – what does it mean to humanity?

When Tron was released in 1982, VR was niche and novelty, cumbersome and clunky – these days the tech is very much here and becoming more accessible every day. Even Steven Spielberg is taking an interest with his upcoming movie Ready Player One. Director Aella Jordan-Edge of We Are Familia has been taking a closer look at VR with her new music video You’re People You’re Evil.

LBB> What was it about VR that caught your interest as a filmmaker?

Aella> To be honest, my interest in the concept of VR was first piqued when I watched The Matrix as a child. I’ve always been a sci-fi lover and now some of the technology used in those cult films are a given part of modern life. While this idea of plugging in to technology is not a new one, it is becoming more relevant as we are increasingly dependent on our smart phones and the internet. Virtual reality pushes us a step further into literally using technology as a form of escapism and one of the most interesting uses of VR is 360 interactive porn – now we can be actively involved in our wildest fantasies, no longer confined to the voyeur. A big inspiration for You’re People You’re Evil was also Being John Malkovich, which explores what it’s like to hide behind another person’s skin – and I became really fascinated with that idea.

LBB> What sort of research did you do when you were developing the idea and story?

Aella> Coming up with and carrying out the concept for this video didn’t require an extensive knowledge of the technology behind VR, but I did try out some VR myself. I had a chance to try out a VR headset for iPhone games and also went to the digital Bjork exhibition at Somerset House where I watched her 360 VR music videos.

LBB> Did anything surprise you personally about VR? And would you be interested in creating content for VR as a director?

Aella> If anything surprised me about putting VR on myself I’d say how vulnerable I felt with the headset on, and also how surreal the alternate reality was. I would potentially be interested in creating content for VR as I think it could open up optional layers of storytelling within a narrative and this has yet to be explored properly in film. The current main contender for interactive story at the moment would actually be epic cinematic style video games.

LBB> What was the biggest challenge involved in the production?

Aella> First thing that comes to mind is the Kryten Helmet Rig, it was heavy and bulky and we got a lot of attention wearing it around Soho – we were shooting during fashion week and it was total pandemonium. Because of the weight it put on the neck, both band, cast and crew shared the fun of wearing it. We also had some challenges on how to make drinking, gumming, smoking, kissing, etc. feel real with an enormous elephant shaped camera rig in front of the face.

LBB> There's also an interesting gender thing going on in the video - what was it like trying to imagine how a woman might experience the world through a male's eyes?

Aella> I’d say the gender factor is actually at the core of the video and VR was the tool which enabled us to explore it. A lot of my work plays on my experiences as a woman, my gender always seems to come into it one way or another. My ex partner is actually transgender, having transitioned from female to male which must have been lurking in my subconscious when writing this concept, though not directly… actually the biggest inspiration was my own experiences. Growing up I was constantly comparing myself to boys: how was their behaviour seen differently? What could they do that I couldn’t and vice versa? How did social expectations vary between genders? The list of my questions could go on. Throughout my life I’ve had many dreams and fantasies about what it would be like to be a boy, down to the simplest question of anatomy… and this video gave me the framework to explore it.