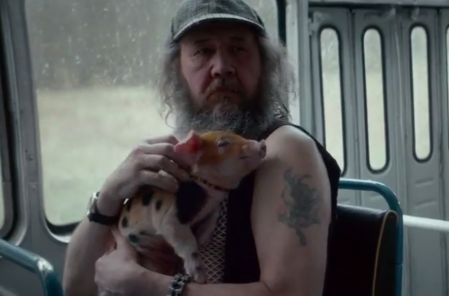 Anomaly has launched a comical and disruptive fully integrated campaign for Virgin Trains, with two TV ads at the heart of the activity  - both of which aired for the first time yesterday.

Through the distinctive new campaign, Virgin Trains has taken a completely different approach to its advertising.

In a bid to drive customer reappraisal the brand has tackled alternative modes of transport (e.g. the car and plane) head-on, showing people that not only is Virgin Trains good value for money, but that there are many benefits to travelling with the train operator.

The two launch TVCs follow the lead protagonist, Valerie, who is posed with a life changing decision that we’ve all considered in the past. What’s the best way for her to get to her big job interview?

The two spots follow Valerie as she ponders this fateful decision, and dramatises the hyperbolic consequences that come as a result.

Working as part of a close interagency group - and having developed a cheeky tone and energetic new look and feel for Virgin Trains across all channels - Anomaly has collaborated with MG OMD and TMW to create the campaign across press, OOH, radio, digital and social. The agency has also created a hero 60 second ad which is going live June 17th.

The TV ads, which are Anomaly’s first for Virgin Trains, were written by Oli Beale and Craig Ainsley and directed by Emmy award-winning Tom Kuntz.

Kuntz is one of the industry’s most respected and talented directors and the man behind Cadbury’s “Eyebrows”, Axe “Chocolate Man”, the Skittles series and Old Spice “The Man Your Man Could Smell Like.”

Danny Gonzalez, Marketing and Sales Director at Virgin Trains on the east coast said: “After on-boarding Anomaly as our new agency, we were confident of delivering a campaign with them that would not only disrupt the sector but also make waves in a broader space. This new integrated campaign delivers on that ambition, and then some."

Katie Knowles, Marketing Director at Virgin Train on the west coast said: “In order to drive behaviour change and get people to consider the Virgin Trains as their preferred mode of transport, we needed to create a campaign that would be fundamentally disruptive. Through our new advertising we’re putting our product and experience front and centre, driving reappraisal in a fresh, exciting way. This campaign is so different;  it’s really Virgin.”

Oli Beale, Executive Creative Director and Partner said: ”It’s just great that the Speedcore genre is finally getting the public recognition that it’s so long deserved”

Mill Colourist James Bamford comments: "The key focus was to enhance the distinction between the two scenes in this piece, stimulating that intense feeling of contrast between each. Director Tom Kuntz wanted there to be two different themes clearly communicated; The first, a feeling of warmth, positivity, and comfort, and the second to be very much the opposite; drained, pessimistic, and subdued. We therefore used the nature of the cut to create one very comfortable and warm visual, and then a much conflicting darker visual, with less colourful and much colder. It was a great project to work on alongside Anomaly, Director Tom Kuntz and MJZ."