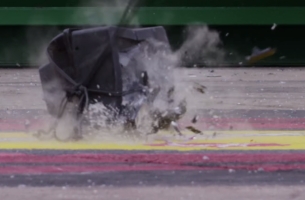 Today sees the launch of ‘Rebellion in your Pocket’, a digital and social campaign to promote Virgin Money’s ‘Sex Pistols’ credit card, which will stir nostalgia and awaken the inner rebel in rock ‘n’ roll fans of all ages across the UK.

Created by AllTogetherNow, ‘Rebellion in your Pocket’ shows real footage of vintage TVs being flung across a 100m distance from an 8m catapult, in homage to the bygone era when rockstars trashed hotel rooms and swung TV sets through smashed windows.

The film opens with comedian Glenn Wool declaring “TVs will fly”, from the face of a suspended TV screen, before 90 seconds of stylised rock’n’roll chaos ensues.

Shot using ten cameras, including one drone, ‘Rebellion in your Pocket’ uses footage from AllTogetherNow’s live #BigTVThrow event for Virgin Money earlier this month. #BigTVThrow allowed thousands of people to participate in the rock’n’roll revelry, entering a competition to fling a TV set remotely whilst watching the carnage on a live stream, at microsite BornDifferent.com.

Dan Evans, Creative Director at AllTogetherNow, said: “The Big TV throw was about making the legendary rock’n’roll lifestyle available to everyone. We wanted to give people the opportunity to create a rare moment of retro excess, and then share it with as many people as possible.”

Conor McNicholas, CEO at AllTogetherNow, said: “The campaign embodies what the Sex Pistols credit card stands for – fun, pocket rebellion and that banks don’t have to be boring. It’s a powerful, inclusive way of bringing to life the ‘There’s money, and there’s Virgin Money’ brand strategy, and a great example of AllTogetherNow’s ‘smarter content’ approach in action: bringing together elements of digital, social, experiential and video production, shrewdly distributed to the right audiences.”

The film, which was produced by Carbon, will run across YouTube, Facebook, Twitter and paid digital media spots. The BornDifferent.com microsite and live stream were powered by tech company Visual Voice.