Created by BBH London, the campaign dramatises the hot deals customers can get from the mobile service provider 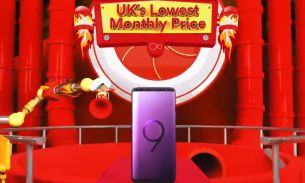 Virgin Mobile is today launching a new campaign that brings to life the benefits of its service and incredible deals.

Created by BBH London, “Hothouse” will run from September to the end of January across TV, print, radio, online and customer comms, and is led by a TV ad which launches on Wednesday 5 September at 08:15 on C4.

“Hothouse” is an evolution of Virgin Mobile’s “Red Hot” campaign, and dramatises the amazing value customers can get. From the UK’s lowest monthly price on popular handsets to monthly Data Rollover, the concept behind the campaign is that nothing leaves Virgin Mobile’s ‘Hothouse’ without being a sizzling hot deal.

The TV ad, produced by Jelly, takes viewers on a handset’s journey through the ‘Hothouse’, accumulating Virgin Mobile’s amazing benefits along the way. The film uses striking animations of make-believe devices, such as the pepper spray breathing dragonators, to depict Virgin Mobile’s hottest deals through the playful concept of a ‘Charlie and the Chilli Factory’ style visual.

Cilesta Van Doorn, Director of Marketing at Virgin Mobile, said: “Virgin Mobile has a history of going the extra mile to give our customers the hottest deals. From being the first UK provider to offer data-free WhatsApp and Facebook Messenger to offering the UK’s lowest monthly prices on a range of top handsets, we’re spicing things up. Our new ‘Hothouse’ campaign captures exactly what makes our deals so hot.”

The campaign is rooted in Virgin Mobile’s core values and highlights the benefits customers can enjoy from superfast 4G speeds and 99% population coverage to Data Rollover and Data-free WhatsApp, Facebook and Twitter as standard. The film demonstrates Virgin Mobile’s commitment to providing its customers with great deals at fantastic value.