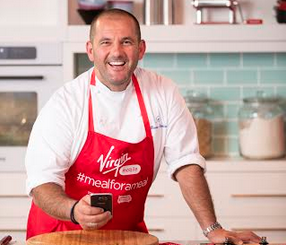 Virgin Mobile Australia has today released the next iteration of the #mealforameal social movement, enlisting one of Australia’s most celebrated chefs, Guillaume Brahimi, to front a digitally-led content and PR campaign.

Last year, Virgin Mobile announced its commitment to ‘Make mobile better’ and the first initiative under this new brand platform was #mealforameal, which saw the telco partner with food rescue service OzHarvest to turn food photos posted on social media into real meals for those in need. So far, over 260,000 food pics have been turned into real meals, but this year Virgin Mobile want to go even bigger.

That’s why this year, Virgin Mobile is challenging Australians to get real and start posting everything they’re eating – the good, the bad and the downright un-filtered.

Virgin Mobile want the un-styled, un-filtered photos of 3am kebabs and Tuesday night’s spaghetti on toast, just as much as the 8-course degustation in the hottest new restaurant. Why? Because every food pic could equal a real meal for someone in need.

The campaign launches today with two pieces of digital content that poke fun at the mobile behaviour of snapping and posting perfect meals. Guillaume Brahimi, one of Australia’s most celebrated French chefs, of Guillaume and Bistro Guillaume fame. Brahimi is known for his fine dining techniques and impeccable standards and will front the content and the wider PR and social campaign, showing that even the finest of chefs can get real for a good cause.

In an Australian first, Virgin Mobile has engaged UK web content creators, YES Studio, to create one of the online films. The production company is known globally for its spoof cooking show format, housed on the hugely popular Yes It’s Funny YouTube channel. YES Studio hack existing celebrity chef cooking segments and seamlessly edit in their own footage to change the context and turn the ordinary into the ridiculous.

Nicole Bardsley, director of brand and communications, Virgin Mobile, explains further: “It’s hard to stand out in a cluttered digital environment, to get people to stop scrolling and not only watch but engage with branded content. We like to approach things differently at Virgin Mobile, so we wanted to turn the cooking show format on its head as a way of generating interest in our cause. YES Studio are masters at creating content that not only entertains but surprises people, so we wanted to use their unique comedic technique to get people talking about #mealforameal.”

The second film also stars Guillaume Brahimi, this time applying his signature French passion and fine dining techniques to the classic ham and cheese toastie, or as he likes to call it, Le Croque-Monsieur. The film shows, in a light-hearted, tongue-in-cheek way, that no matter what you’re cooking and how you cook it, it all counts for a good cause.

The content will be supported with a comprehensive digital media buy spanning YouTube, Facebook and Twitter. Virgin Mobile will also be running premium video ads across Instagram. Additional media support at launch will include Westfield table-top advertising in high-traffic food courts, driving lunch-time engagement, as well as visibility through Virgin Mobile’s retail stores and a dedicated customer communications strategy to engage customers. The campaign is being supported with a wider PR and social campaign, which includes a dedicated paid and editorial influencer program.

Ronni Kahn, founder and CEO of OzHarvest commented: “Last year, we were able to deliver a quarter of a million meals to Aussies in need through the #mealforameal initiative. I believe the success of this was because Virgin Mobile tapped into an existing mobile behaviour and gave people the opportunity to turn it into something more meaningful. This year, we’re asking people to do something that’s perhaps less comfortable – post all their food pics, no matter what they look like! We’re hoping this will mean more food pics and therefore more real meals we can deliver.”

Nicole Bardsley concludes: “We’re so passionate about our partnership with OzHarvest and we love #mealforameal because it’s moved beyond being just a campaign to become a social movement. I believe this is because we aren’t asking people to change their mobile behavior, we are giving them a way to feel better about it. Taking pictures of food is great! It’s not about mocking this behavior, it’s about showing Aussies that their food pics can be so much more. They can be turned into real meals for people who need them.”

To learn more about #mealforameal campaign and how Virgin Mobile is making mobile better, visit: www.makingmobilebetter.com.au.