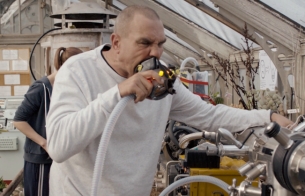 As Britain's favourite game, Lotto is a key contributor to the Good Cause Projects which The National Lottery helps to fund – raising, on average, £34 million every week. Earlier this year Camelot challenged AMV to create work that would really get the nation talking and, in response, AMV created the ‘Please Not Them’ campaign, which broke in July.

The campaign is rooted in the insight that everyone has dreams, and that deep down they’d rather their dreams were realised over other people’s. By bringing the ridiculous dreams of celebrity players to life, the campaign plays on the fact that sometimes, it might be better for the nation if certain people’s dreams stay as just that: dreams.

The first burst of the hugely talked about campaign saw Piers Morgan, Katie Price and Laurence Llewellyn-Bowen share what they would do if they were to win Lotto. The second burst of the campaign features two new celebrities and highlights the exciting Lotto game changes, which give players more chances to become a millionaire than ever before, giving the celebs even more reason to dream big.

Noel Edmonds was the first new addition to the Please Not Them line-up. During the X-Factor on Sunday night, Noel shared his dream of claiming legal copyright over all house parties. There are TV, Print, OOH, Radio, Digital and POS executions, as well as support on social media. Beyond the National Lottery and F.A.I.R (Fighting Against Illegal Revelry) accounts across social platforms, the content is also being seeded by known party-going celebrities Jamie Laing, Charlotte Crosby and Mario Falcone – bringing the true horror of Noel’s dreams to the attention of their Twitter followers.

Vinnie Jones will be the fifth celebrity in the campaign, breaking on TV this Sunday. Vinnie’s concept is that he has created a machine, the ‘Agro-Tron’, that he believes has the capability to turn people’s anger into electricity. Vinnie’s banking on a Lotto win to take the ‘Agro-Tron’ nationwide, in order to generate and capture as much anger as possible. Again, as with Noel, Vinnie’s dream will be played out through the line, including reactions from celebrities on Twitter who are opposed to his horrendous plan.

Across every touch point, the hashtag #PleaseNotThem serves as a rallying cry, connecting the nation’s conversations as they unite against the potential disaster caused by the celebrities’ dreams. The only hope the general public has is to play Lotto and hope that it’s their dreams that come true, not the celebs’ dreams. Because, as always, Play Makes It Possible.