Vincent Laforet Flies 7,500ft Over NYC for These Stunning Snaps 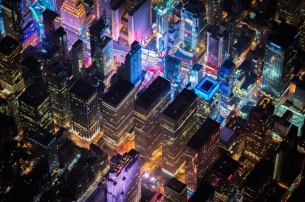 Great Guns Director & photographer Vincent Laforet has fulfilled a lifetime ambition and taken a rare high altitude night flight above New York City to shoot some absolutely breathtaking pictures. So stunning are the images that they have already gone viral with over a million times in under a week, with no signs of abating.

Vincent described the experience as both exhilarating and terrifying all at once.  He admits it was the scariest helicopter mission of his career…as well as the most beautiful.

Since his teens, Vincent has dreamed of taking these photos but cameras have not been capable of taking ariel images from helicopters at night until only very recently.

Vincent adds “Helicopters vibrate pretty significantly and you have to be able to shoot at a relatively high shutter speed (even with tools like a gyroscope) and that makes it incredibly difficult to shoot post sunset. Armed with cameras such as the Canon 1DX and the Mamiya Leaf Credo 50 MP back- both capable of shooting relatively clean files at 3200 & 6400 ISO and a series of f2.8 to f1.2 lenses including a few tilt-shift lenses. I was finally able to capture some of the images that I’ve dreamed of capturing for decades.”

Since these images were published, Vincent has been interviewed by Good Morning America, Gizmodo, Yahoo, Mashable and a dozen more. Click here to view the original project and more hi-res photos.