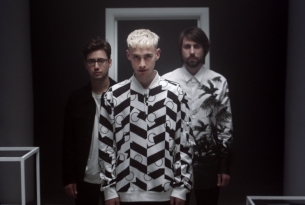 Channel 4 will hand control of an entire ad break to its viewers and fans of British electro-pop band Years & Years by way of a live Twitter battle at 9.45pm on Friday 10th July – the release date of the trio’s hotly anticipated debut album Communion from Universal’s Polydor.

Viewers will be able to vote throughout the three and a half minute break to switch between three completely different, never seen before performances of the band’s brand new single Shine, using the hashtags #ChooseDark #ChooseLight or #ChooseShadow that correspond to the style of each separate music video. Years & Years have become known for their impressive live performances featuring exciting lighting displays.

The bespoke ad break originated from a collaboration between Channel 4 Sales, Polydor Records, MediaCom and The Outfit. The real-time viewer interaction represents a global broadcasting first.

Years & Years achieved a number one single earlier this year with their international hit ‘King’ and recently performed to a packed out stage at Glastonbury. Years & Years said: “We love the idea of giving our fans control of a music video and the immediacy of it happening live. We had a lot of fun playing with the different themes of light and we hope the audience enjoy experiencing our music in this new way."

Viewers’ tweets will be counted live during the ad break and tallied every 30 seconds.  Two alternative music video choices to the performance playing in full screen will be displayed as insets. The broadcast will switch seamlessly between these to reflect the performance Channel 4’s viewers most want to see. A selection of participants’ Twitter handles will be broadcast during the break as thanks for getting involved.

The Years & Years activity will be broadcast during the last ad break of youth skewing comedy and quiz show mash-up 8 Out of 10 Cats Does Countdown, tapping into Channel 4’s core audience of 16-34 year old viewers.

The performances will be simulcast to a global audience via the band’s official website as well as on Twitter and Facebook and will be available after broadcast as an interactive online video here.

A series of teaser ads will be visible across Channel 4 and E4’s schedules from Monday 6th July as well as on the band’s social networks carrying the hashtag #ShineTakeControl.

This unique campaign builds on Channel 4’s strong track record for live innovations in the ad break with recent examples including the award-winning ad which saw Sam Smith perform live from a London gig and Ed Sheeran’s invitation to fans to pick which track from his latest album he should perform during a break on E4.

The ad is being produced by the award winning team at creative agency The Outfit who were behind both the Sam Smith and famous Honda parachute live ads.

Spredfast, the world’s leading social software platform, is responsible for capturing real-time data on the night.

The 10th of July marks an historic date in the music industry’s calendar with the launch of New Music Friday which sees the new standardised worldwide music release day move to Friday.

Jack Melhuish, Marketing Director, Polydor Records said: “Years & Years are a special band and we felt it was important to do something special to celebrate the release of their debut album. Giving fans and viewers the chance to control and direct a TV advert as it happens has never been done before and plays perfectly into the band’s ethos of rewarding their fans and always being on the cutting edge”

Jonathan Allan, Sales Director, Channel 4 said: “This exciting partnership is a real treat for Years & Years fans. It’s another great example of C4 combining the power of TV and social media to put decisions into the hands of our viewers and allowing advertisers to engage with their audience in new ways.”

Dino Ioannou, Global Head of Universal Music, MediaCom said: “Years & Years have such a dedicated and socially engaged fan base. We wanted to give them a unique opportunity to be integral to this album campaign on Channel 4.  It’s another great example of MediaCom being involved in an exciting partnership that both innovates in broadcast and drives huge engagement through social channels.”

Charlie Read, Founding Partner, The Outfit said: “This idea will mobilise Years & Years' socially active audience, put them at the heart of a content-led marketing strategy, whilst enticing the wider Channel 4 audience to take part as well. The result is a unique interactive event that has been an enormous, highly collaborative creative and production challenge and C4 viewers will take control of the ad break for the very first time."