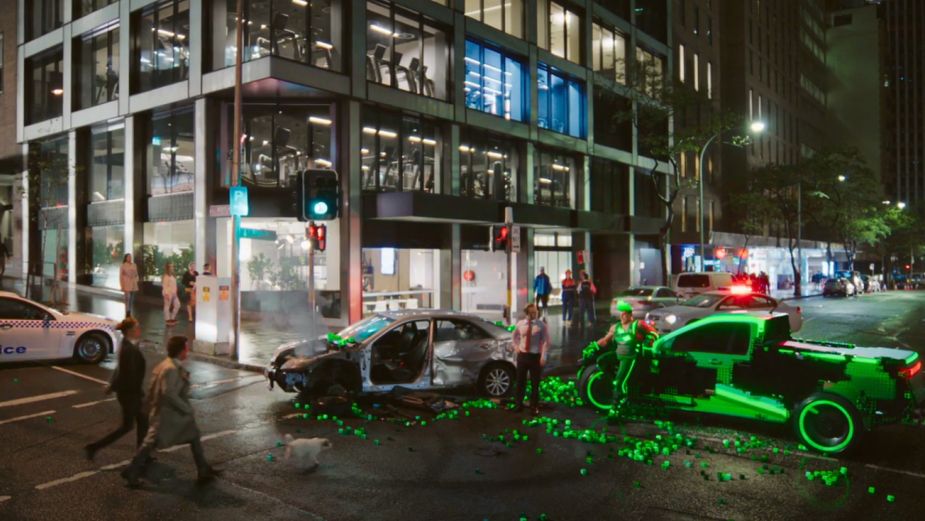 An international collaboration between Framestore, Good Oil and 303 MullenLowe Sydney has resulted in a thoroughly entertaining and imaginative TVC with universal appeal for Australia’s fastest growing car insurer, Budget Direct.

Directed by the acclaimed Danny Kleinman, remotely from the UK, the creative triumph, combining state-of-the-art animation and cleverly integrating a culturally relevant reference to the global gaming obsession, helped create a distinct and memorable piece of work that seamlessly incorporates the brand’s core commercial objective – to strengthen market position.

Dubbed ‘Driving’s No Game’, the ad, created by 303 MullenLowe Sydney is the latest in a long-running campaign series featuring Special Detectives Sarge and Jac

The ad features an extraordinary collision between a reckless driver and car, straight out of a video game, and a Budget Direct customer and shows how Budget Direct’s car insurance picks up the pieces in all kinds of unfortunate situations – because they offer big cover, without the big price.

“The production process and creating good, well-crafted work with the current situation is tricky but the team in Australia is fantastic and the client is supportive and adventurous. Simultaneous collaborations from several countries felt as sci-fi as some of the things Sarge has to deal with in this ad series, but despite the time differences the process was a joy. It’s great fun finding ways to bring the strange and wonderful world of ’Sarge’ to life,” he added.

Special effects were handled by Framestore and the combination of real and gaming worlds proved both challenging and fun to deal with.

Commenting on the hugely complex animation elements of the ad, Jules Janaud, VFX Supervisor, Framestore, said: “Having the chance to design and CG build the racer and his car, in a video game style, made this job especially fun. Our main challenge was trying to match and play with today's cultural game codes, while trying to incorporate that into a live action narrative piece. With all of us being in different parts of the world, the latest VFX and communication tools allowed us to work seamlessly across the globe, to create a unique genre crossover.

Jonathan Kerr, chief growth officer at Budget Direct said: “As an insurer it’s important to highlight the serious consequences of dangerous driving while also showing how we take care of our customers when they are impacted by it. Our campaign’s blend of extraordinary meeting the real world, gave us a unique opportunity to do just that, in the latest instalment in our campaign.”

303 MullenLowe’s ECD Bart Pawlak said: “Collaborating with the likes of Danny Kleinman, Dave Wood, Framestore, and Good Oil on the latest instalment in the campaign, was a real joy. All made possible by the Budget Direct team. It’s no surprise that they remain Australia’s fastest growing major insurer.”

The campaign airs from May 2 nationwide in Australia across TV, online, OOH, and social.