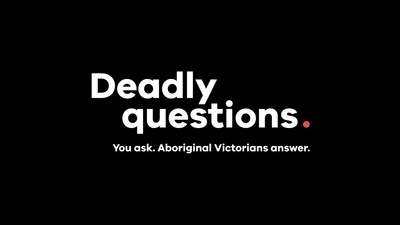 As Victoria embarks on a path to Treaty, research has shown many Victorians feel they know little about their State's Aboriginal heritage or Aboriginal affairs in general.

But along with their lack of knowledge, Victorians also don't feel comfortable asking questions for fear of offending or appearing ignorant.

Deadly Questions provides a platform for Victorians to get much needed answers and opens up a conversation between non-Aboriginal Victorians and the Victorian Aboriginal community at a pivotal moment in the State's history.

Through the campaign website, people can ask questions, anonymously if they wish, and these questions will be answered by Aboriginal Victorians - responding via text or video.

Outdoor, social and digital advertising features some starter-questions designed to get people thinking about what they might like to ask.

"Never before has there been a forum like this to provide a deep understanding of Aboriginal cultures, and we look forward to joining Victorians in a conversation that needs to be had."

Says Evan Roberts, executive creative director, Clemenger BBDO Melbourne: "This country has a long way to go to get to Treaty, but by creating an environment to talk about the issues that currently divide us we hope to unify Victorians in support of one."

Victorians can ask their Deadly Question at deadlyquestions.vic.gov.au and take a step forward in fostering a greater understanding of Victoria's original culture.