A campaign that introduces the stories, the history, the people and of course the sporting excellence and grandeur that makes Flemington unique 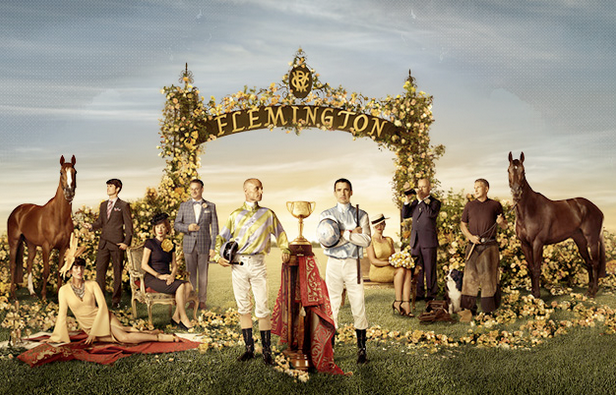 The first day of Spring saw the launch of The Playground of Racing Royalty at Melbourne’s Southern Cross station as Flemington came to the city in a flurry of racing, fashion and glamour. This campaign has been building on social media for the last six months with more than 100 pieces of content.

“The new campaign is about welcoming people to Flemington; the treatment is a playful celebration of Flemington’s traditions, history and other-worldly appeal, while highlighting that it belongs to everyone,” Patroni said.

This portrait of Flemington’s greatest assets—human, equine and physical—forms the campaign’s hero image, supported by digital activations, experiential, an emotive television campaign and broadcast sponsorships showcasing the beauty and exhilaration of thoroughbred racing.

It is about the journey towards the Carnival, the joy of being a racegoer, VRC member, horse owner or Fashions on the Field contestant alike. This campaign puts Flemington and its thousands of subjects in the spotlight.

“The Melbourne Cup Carnival is the pinnacle of racing. This campaign has been a fantastic collaboration between our racing royalty, photographers, media partners, production teams, the VRC and our agency; the anticipation has been building all year, and now Carnival is upon us,” said Claudia McInerney, general manager, Grey Melbourne.